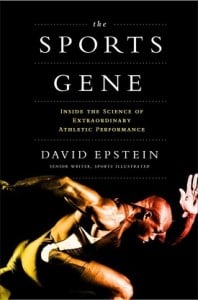 [xrr rating=3.75/5]Despite the vast complexity of human behavior, otherwise reasonable debate continues to be dominated by the false dichotomy of nature versus nurture. Clearly, one’s biology and one’s culture are intertwined in forming behavior. Nature and nurture are not diametrically opposed, but rather complement each other in forming the whole person. The same is clearly true of sports achievement. We’ve likely all heard the maxim that “practice makes perfect,” but one cannot ignore the fact the most elite athletes couldn’t have reached the highest echelon of their sports without some remarkable genetic gifts.

In his book The Sports Gene, David Epstein (a senior writer for Sports Illustrated) makes short work of a famous scientific theory that 10,000 hours is generally “both necessary and sufficient to make anyone an expert in anything.” Early in the book he gives the example of Swedish high-jumper who, through precise and obsessive training, overcame physical deficits (including being of only average height) to become a world champion in the sport, only to lose his crown to a newcomer with awkward, novice form who preferred basketball and found the high jump “kind of boring.” Turns out that, when you’re equipped with the Achilles tendons of a kangaroo, you can leap right past those thousands of hours of grueling training.

Epstein turns an investigative and scientific eye onto what makes a professional athlete. Those who focus solely on the practice-and-passion angle may claim that there are a million other American guys out there who are 6’8” but aren’t in the NBA (such as Colin Cowherd once did in an ESPN radio broadcast), when the reality is there are likely fewer than 20,000. What’s more, of the American men between ages 20-40 who stand over seven-feet tall, a whopping 17% currently play in the NBA. But practice, determination, and sports IQ obviously still play a huge factor in athletic success. Epstein doesn’t dispute this, he simply provides on onslaught of examples of how genetics most often trump those other variables.

Epstein even digs into the science behind how some people are simply better able to endure the rigors of training. He points out that visual acuity is crucial to success as baseball player, that wingspan is even more important than height for success in the NBA, and that body proportion plays an integral factor in numerous sports from gymnastics to track and field. And Epstein doesn’t shy away from discussing the physical differences that are based on gender and race. Cultural influences factor in as well, as discussed in the extensive sections of the book devoted to Jamaica’s powerhouse sprinters and, on the other end of the running spectrum, Kenya’s stranglehold on distance running. But the author makes a compelling case that the right set of genes is tantamount to elite achievements in athletics.

Epstein does a fine job of interspersing historical and personal anecdotes with the copious amounts of scientific date and jargon that he presents (even getting into how genetics can tragically play a role in sudden death during competitions). Much like Jared Diamond’s Guns, Germs and Steel, this book isn’t exactly an easy read, but it’s certainly accessible to the layperson interested in learning how the confluence of biology and society can explain the current state of affairs. This book delves far deeper into the scientific angle than most Sports Illustrated articles you’re likely to read. If you’ve ever wondered whether its nature or nurture that gave the sports world the Manning brothers and Williams sisters, The Sports Gene is essential reading.