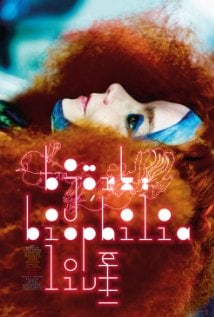 [xrr rating=3.0/5]Bjork’s Biophilia is a concept album about nature and biology and their relations to music, and from its conception Bjork decided to double-down on the concept and make elements of nature integral to the sound of the album; most notably, a tesla coil provides a bass line on “Thunderbolt” and gravity allows stringed, cylindrical instruments to rotate and swing by a pick on a number of songs. This process is documented in the British TV documentary When Bjork met Attenborough, which screens with Bjork: Biophilia Live in some locations.

The latter film, directed by Nick Fenton and Berberian Sound Studio’s Peter Strickland is a concert film documenting the final show of that the Biophilia tour, which showcased the album’s unorthodox instruments in a live setting. Shots of the inner workings of an erupting volcano are cut-in to the similarly themed “Mutual Core,” both cellular life and the cosmos get a bit of screen time on “Cosmogony” and the film alternates between these images and the concert according to the rhythm of the bass or drums. Those occasional flourishes outside, Biophilia Live is “just” (note the scare-quotes) a concert film, albeit a pretty good one.

Bjork’s set is, of course, heavy on material from Biophilia, particularly early, where she hits upon highlights like “Moon” and “Crystalline.” Unfortunately, Biophilia is not one of Bjork’s best albums, and when she breaks them up with songs like “Hidden Place,” “Possibly Maybe” and a more tribal rendition of “Isobel,” the disparity is clear. But Bjork is clearly most proud of her newest material, and she takes her time and works to create a stage-show for the audience, dancing with her back-up singers and pacing around the outer edges of the circular arena, belting the higher notes for all to see.

As enchanting as Bjork is, however, her band, from her back-up singers to her drummer Chris Corsano, are at least as impressive. The singers get a showcase early with the aforementioned “Hidden Place,” from the sexy and sensual Vespertine and Fenton and Strickland spend much of the second half of the film showcasing Corsano.

Their approach is rather standard, alternating between close-ups, mostly of Bjork, and longer shots that show the whole spectacle before cutting in on a particular musician or nature-operated instrument. Rhythms and melodies of a song shape the rhythm of the editing, but Bjork’s rarely exceeds mid-tempo, so the film has a consistent and uniform pace to it—you never get the impression that Fenton and Strickland are filming individual songs. They wisely omit shots of the crowd almost entirely—you might catch a few reactions in the background of longer shots, but nothing more. Indeed, a show like this is more about bringing the creative process on stage for show-casing than getting crowds to dance and sing, which Bjork urges only near the end, often to no or delayed avail.

At the same time, to call it “just” a concert film in appearance is to leave out a significant detail: Brett Turnbull, who has previously shot Depeche Mode, Jessie J, The White Stripes and even a Radiohead documentary, serves as cinematographer. Turnbull’s work make individuals look closer together than they are so he can showcase the most notable parts of a song together, and his use of deep focus allow the various automated instruments to remain clearly in the frame with Bjork. The show itself is spectacle, and Turnbull captures it, making Fenton and Strickland look smart for simply showcasing the concert itself.

On the downside, there is a sense throughout that the crowd is more appreciated than moved by Biophilia material, as older songs get the loudest cheers. Bjork’s decision to give the crowd one more song to commemorate the closing of the Biophilia tour is greeted with enormous applause, but when the band goes into Volta’s rollicking “Declare independence”, the crowd’s quietness and stillness suggests that they likely wanted something older—“There’s More To Life Than This” or “Army of Me,” perhaps. Still, they do eventually get into it, and the film’s audience will too. It’s a great performance, even if it isn’t one of Bjork’s best songs.

Which is what Bjork: Biophilia Live comes down to: How much do you like these songs? Strickland’s and Fenton’s attempts to tie a song to its subject matter visually or more decorative than integral, as are their attempts to show the extent that nature plays in the music itself—the musicians seem far more important. Fans of Bjork (and particularly those wishing to see her on the big screen again, after Lars von Trier’s Dancer in the Dark) will likely enjoy it, but new converts are unlikely.