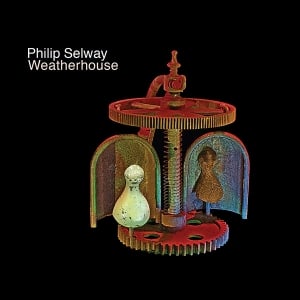 [xrr rating=3.0/5]It’s hard enough to be the drummer. The blue-collar of the band, always in the background locked down to a stool, often overlooked, if visible at all. But when you’re a drummer and just ahead of the release of your second solo record (following-up a timid first effort) your enigmatic frontman goes and surprises the world and unleashes a media event for his own proper release, the knife seems to twist a little bit more. Though Philip Selway will never be confused for Thom Yorke and likely has no interest in switching places with him, with Weatherhouse, he’s making it a bit harder to go unnoticed.

To be clear, Selway isn’t just a drummer. Manning the kit for Radiohead, he’s responsible for both some of the grooviest and the most offbeat time signatures of the past 20 years, not to mention his harmony additions. Thus the disappointment many felt by Familial, his folky 2010 release that was so delicate, it very much suited the role of someone not wanting any sort of spotlight on them. Weatherhouse, however, finds Selway seemingly more confident, playing with more mechanical undertones and an almost hymn-like approach much more in line with his day job than its predecessor. It’s a heavier record in every sense, and it has much more of a group feel despite having fewer players (he’s joined by multi-instrumentalists Quinta and Adem Ilhan).

Though not always consistent, Weatherhouse’s strength is in its varied dynamics, something glaringly absent on Familial but evident in the first few moments here. In fact, listen to the beginning of the album-opening “Coming Up For Air” and you might think you’re listening to The King of Limbs. “I feel a lot in the air has changed/ I’m not alone,” Selway sings, as strong, pulsating electronics, serpentine undertones and a steady beat give way to a flower-y chorus shimmering with U2 guitars. Built around a rubbery groove that wouldn’t have been out of place on Hail to the Thief, “Around Again” features the most interesting percussion of his solo releases, while “Miles Away” displays the kind of Aphex Twin atmoshperics that could easily be pictured to be sung by Yorke. It’s the opening of “Ghosts” that bares the most striking resemblance to Radiohead, however. With angular acoustic guitars and a melody that directly recalls “Exit Music (For A Film),” you’ll do a double take before the tracks veers into the dark, breezy territory of South.

When Weatherhouse falls flat, it has nothing to do with the actual songs. Selway’s voice is crystal clear and he has a soft and melodic delivery, but it often lacks bite and can come across very anonymous. The Beatles-esque piano ballad “It Will End in Tears” is a nice track with the uncanny grandeur of Elbow, but it could have benefitted from more of a weathered transmission. Similarly, the vibraphone and string combination of “Drawn to the Light” make for an interesting texture, but it essentially turns into background music outside of the instrumentation. Still, Selway is miles ahead of where he was, evidenced by far more compelling forays back to folk on tracks like “Don’t Go Now,” which features gorgeous strings atop plucked guitar that would have been dispatched in a much more reserved manner a few years ago.

“There’s always a sad song playing/ I’m over it now,” Selway sings during “Let It Go,” a track that seems to be about freeing oneself of pressure, of the past. Perhaps he’s talking about Radiohead, likely not, but it’s an interesting line given the record he’s made and how during that track moody piano passages toe the line against exhaling keyboards. Philip Selway certainly isn’t known to be a dark soul, but adding some shadow most definitely suits his music. Perhaps with Weatherhouse we’re getting to know the real Philip Selway.