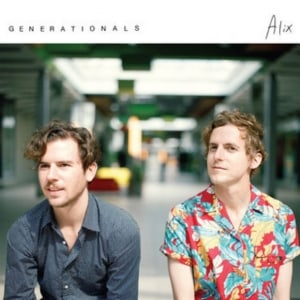 [xrr rating=2.0/5]You can tell a lot about the latest Generationals record just by looking at the shirts its members wear on its cover. On one hand, there’s the formal, button-up precision that they use in their music, but also the frilly, floral patterns they paint on the sonic canvas. Alix is the latest in a string of albums where the band’s sun-and-fun sound is drawn out by meticulous paintbrush rather than a haphazard spray can. They’re one of the most clinical of the shiny, happy indie pop bands out there, and it’s up to you to decide whether that’s a strength or weakness.

Since the instruments became prevalent, synthesizer music has shape-shifted as much as any other genre. Nonetheless, Generationals appear intent on cementing the stereotype that synth-based music is usually best shuffled over into the pop category. Trent Reznor would balk at this, but it’s often true. A cursory look at the best-known synth bands of our day leads to a range of disparate sounds that nevertheless trend toward pop. So does Generationals.

The problem with this band, though, is that they’re the least idiosyncratic of the bunch. This is music made for (and used in) advertisements, jingles and other trite marketing. Don’t get me wrong, there’s a lot to love about the electric drums and chimey synth hook on “Black Lemon.” But that enjoyment is the kind of vaguely pleasant feeling one gets from seeing some inane ad featuring someone splashing around at a water park. Like their similarly pluralized synth-pop compatriots Cults, Generationals are bound to make your day better, but they struggle to do anything more evocative than create nice background music.

“Gold Silver Diamond” is a Merriweather Post Pavilion-like track devoid of experimentalism, and “Charlemagne” borrows its keyboard bass rolls from ‘80s new wave groups like Devo and Oingo Boingo, though it never reaches those bands’ hooky heights. And while it’s nice to see a band that is well acquainted with the hat-tricks of their chosen form, no magic show is very engaging if the performer is just going through the motions. On Alix, it’s hard to get lost in the illusion when we all know that the rabbit is already hidden away in the hat. And worst of all, these aren’t just stunts pilfered from other bands—they’re retreads from Generationals themselves.

So yes, Alix is both a formal study and floral portrait of what makes synth-pop such an enduring genre, but neither is of much use or interest to the average music fan. This new Generationals record is a completely inessential release, but Alix might be worth throwing on if you just want to chill out.