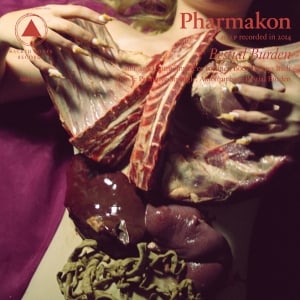 [xrr rating=4.5/5]There is a difference between music that is difficult to make and music that sounds difficult to make. As Pharmakon, Margaret Chardiet, a fixture in the New York noise scene and cofounder of the Red Light District collective in Far Rockaway, does not sound like she is in control. Her work sounds like it was agony to produce, and she has made that agony the focus of the work itself. Extreme noise music such as this can be a conduit for the composer’s psychological pain as well as the listener’s physical pain, but it tends to be a confrontationally mechanical genre (not a bad thing!), born from ’80s British industrial music and New York no wave. Chardiet’s canny move – and presumably the reason she’s found an audience outside of extreme power-electronics aficionados – is her human presence. As the noises grow nastier and more pulverizing, so too does the awareness of what Chardiet had to put herself through to make them. Her arsenal of animalistic vocal tics – wails, shrieks, snarls, growls, gurgles, moans, bellows, roars and gnashing – has on occasion been likened by critics to the demonic burn of black metal’s vocalists, but while I can hear the connection they’re drawing, it feels misguided to me. Black metal is identifiable by its acrid quality, its scorched-earth vision. If Pharmakon fits anywhere into that narrative, it’s the sound of a woman still alive for the scorching. There’s nothing inhuman about her singing; rather, it’s horrifyingly immediate.

The inspiration for her sophomore LP, Bestial Burden, was a life-threatening cyst that called Chardiet’s attention to the frailty, unreliability and innate repulsiveness of the human body. These themes were already at play with her first full-length, Abandon, which boasted maggot-infested, sexually inflected cover art even grosser than the butchered animal meat adorning the new album’s sleeve. Abandon’s single was called “Crawling on Bruised Knees,” which is a pretty good description of what listening to Pharmakon feels like. Every Pharmakon song sounds like it was dredged up from impossible depths, as if Chardiet almost didn’t survive making it. She gravitates towards plodding, dirge-like compositions that sound like they’re in danger of falling apart into twisted scraps of metal and melted plastic at any moment. The Nancy Sinatra-indebted version of Sonny & Cher’s “Bang Bang (My Baby Shot Me Down)” that Pharmakon released in advance of Bestial Burden is a rare moment in which she “sings” rather than gutturally vocalizes, but the restraint only emphasizes the tension. The mechanical drones that structure the song are loaded, by dint of their association to Chardiet’s body of work, with the promise of unimaginable violence. Pharmakon’s music is hard to listen tobecause it sounds hard to make. To listen is to submit willingly to a brutal, potentially damaging experience. You may even get the feeling that, each time you press Play, you’re inflicting the process of production on Chardiet all over again. The listener is implicitly complicit; we’re all down there in the pit with Chardiet, and oh, how deep and dark it is.

Like its predecessor, Bestial Burden is built from pummeling drum machines, searing blasts of static, surging waves of low-end drone and all manner of sonic shrapnel. Chardiet is in the middle of it all, her voice vividly conveying the sense of a writhing body jolted and shaped by her own power-electronic compositions. The hysterical gurgling that closes out “Intent Or Instinct” is an exceptional instance of Chardiet’s vocal command. But the human body is woven still deeper into the album’s musical tissue. The most viscerally distressing track on the record is “Primitive Struggle,” composed of nothing but muffled drum machines, steady throbs of bass and a sampled coughing fit. The cough goes on and on. As it enters its second minute, it starts to sound dangerous. Initially it’s a heavy-handed signifier of illness, but later it’s a dreadfully immediate memento mori, a glimpse into the real process of decay even more piercing than Chardiet’s vocals.

Chardiet’s singing has developed far beyond her work on Abandon, opening the music up to a richer array of tonal possibilities. The title track realizes Pharmakon’s most threatening aspect by establishing a totally immersive soundworld, full of twists and turns that move the listener not laterally but rather deeper and deeper. Chardiet opts for a faux-childlike vocal, dragging out and frying the last word of the central lyric “I don’t belong heeeere” like any thirteen-year-old American teen might. It’s a decision that increases the effect of “Bestial Burden” exponentially, and demonstrates that Chardiet’s sense of drama is far more nuanced than the violence of Pharmakon’s sound might suggest. Humanity, again, is the best thing about Pharmakon. It’s always horrifically corroded by the time her records conclude, but it is never unrecognizable, and therefore it is all the more abject. The more desperately alive Chardiet sounds, the more devastating her systematic assaults on her own self.