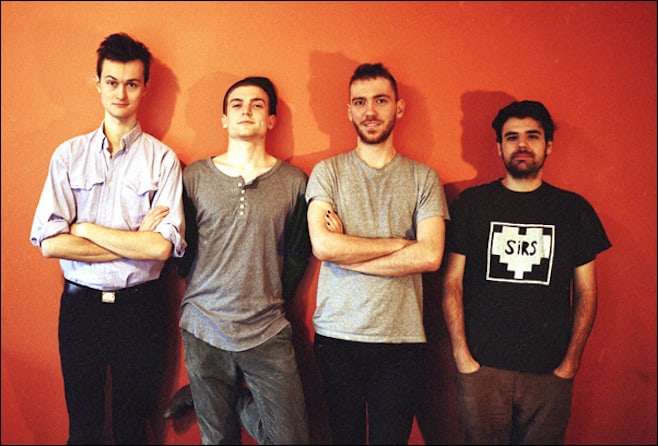 Ought made waves earlier this year with their excellent debut LP, More Than Any Other Day. The record has plenty to enjoy for fans of college rock groups like Talking Heads, Pixies and the Feelies. The band is made up of Tim Beeler on guitar and vocals, Matt May on keyboards, Ben Stidworthy on bass and Tim Keen on drums. We talked to them about books they’ve loved, what it’s like to be compared to bands they’ve never heard and how they manage to record such calculated yet chaotic songs.

I’ve heard you guys are fans of Don DeLillo’s novel White Noise. How does the book resonate with you?

May: I think the thing that first got me was the really dark sense of humor to it. It also never comes off as sarcastic, or like it’s making fun of anyone. He talks about very real stuff and presents it in a straightforward, almost mechanical way. It’s almost disturbing how okay it is for the characters to talk about this terrifying thing in the sky.

Keen: The three of us read that probably in the space of two weeks a little over a year ago. Something about the way he writes about institutions like the government or airports. Even at the university, the protagonist is grappling with how fucking absurd it is that they have to deal with all the things they’re dealing with. Those things become normalized so quickly. Also, he’s teaching Hitler and someone else is teaching Elvis and they tag team the [Elvis] class. Nobody’s even aware that it’s insane. But they’re both just doing it to fulfill their purpose of what they feel they need to do in the world. You’re hit by that crazy institution. I think about that a lot.

Any other books or authors that have influenced your worldview or your songwriting?

May: One of the first writers I got into where I read everything they did was Kurt Vonnegut. I don’t know. I’ve been pretty bad at fiction recently because in university I was only reading school stuff, despite my best efforts. I just read Patti Smith’s autobiography [Just Kids].

Keen: I’ve been reading a lot of Anne Carson recently. She’s been blowing my mind. She’s a Canadian prose poet. She takes ancient Greek myths and reframes them, basically does this restructuring of the world around this tragic and very personal love. It’s really, really beautiful.

Your sound is pretty ramshackle, it sounds like it’s coming together at the same time it’s being recorded. But music like this needs to be calculated in its chaos. So what’s your recording process?

Keen: It’s really laborious; it takes a really long time. We’ll jam for a really long time and snip out segments of the jam we find interesting. We’ll find, like, one riff that syncs up with one bass line, and then take that and try to flesh it out.

Beeler: It’ll either be that or the much rarer yet exciting occurrence when a song just comes out immediately.

What was a song that came out right off the bat?

Beeler: “Today More Than Any Other Day” was almost done on the first day we started writing it. “Beautiful Blue Sky,” too.

In the music press, there’s been a lot of emphasis on the sincerity of your material. When it comes to lyrics, what would you say is your main focus or inspiration?

Beeler: For inspiration, I can’t really point at anything in particular. I wrote poetry without playing music so that probably influences the delivery a lot, the way I’ll write awkward lines and sort of push them into the songs.

You get compared to a lot of iconic college rock bands. Who were the bands you were most into when you were in college?

May: I’ve always been really nerdy and spent a lot of high school and early university excessively finding stuff. I guess it’s calmed down a little since then. I have different phases and different things that mean a lot. One thing I really like a lot and point [to] is Grouper’s discography. I like Black Tambourine, a really awesome British noise pop band.

Beeler: I’ve found almost every artist I’ve really cared about, I’ve encountered via friends. Someone who’s close to me tells me to listen to it and I develop a connection with it. I listen to lots of different stuff but never really delved into a scene or a world. So yeah, I never really had a formative, cultish devotion to a band.

You guys earned the Best New Music tag from Pitchfork. Was that something you were really excited by or just another brick in the wall?

Keen: It’s complicated. It’s definitely useful; it makes a lot of what we want to do easier to do. It’s nice that people are listening to the record and responding to it, so it’s difficult to write it off in any way. You can’t make a record to make someone like it though.

Were these songs for your new EP lying around after you put together the final track list for More Than Any Other Day? Are there any changes in your sound that you’re excited to put out there?

May: It’s mostly a physical form of songs we’d done before that didn’t end up on the record. I guess “Waiting” was written at the same time as the record. We still really like those songs and play them, like “Pill” and “New Calm Pt. 2.” “New Calm Pt. 3” was an improvised jam we took a piece of from the same recording sessions for the EP, since all the songs were rerecorded.

Keen: I’m particularly excited about “New Calm Pt. 3.” It sounds pretty different from the other stuff that we’ve recorded. It’s a fairly long, mostly ambient track with some spoken word stuff. I think it makes sense with the way that we jam and practice and also with all the music we listen to in our solo worlds that isn’t post-punk. I’m pretty happy we found an avenue to bring that in.

Do any of you have a favorite record to come out this year?

Keen: The Lungbutter record, for sure. It’s called Extractor, by our friends [– they’re] a Montreal band.