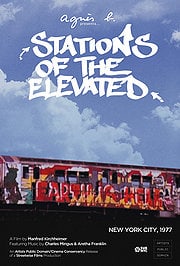 [xrr rating=4.0/5]A filmmaker can’t go wrong with Charles Mingus on the soundtrack. The images in director Manfred Kirchheimer’s impressionistic New York documentary, Stations of the Elevated, are strong even without classic jazz.

The film opens with shots of a New York City subway car rail yard circa 1977. Kirchheimer’s strong compositions throughout the film mark him as a street photographer with a movie camera, but his film begins with what amounts to industrial abstracts – that is, before he pans down to subway cars entirely covered in graffiti art.

I’m generally not a fan of street art, but these colorful tags are a vivid portrait of a long-gone era of the New York subway, and they’re not the film’s primary subject matter. These spray painted metal canvasses vie for attention with the views from the subway cars themselves: hand-painted billboards, and a lot of them. In fact in this era of advertising, the difference between rogue taggers and billboards is a matter of degree, their similarity reinforced with footage of a shirtless painter bravely navigating the scaffolding of an uncompleted billboard. But the director did not capture a tagger in the act – this shaggy-haired painter is a billboard artist finishing off an ad.

I find the billboards much more interesting than the graffiti, and Kirchheimer often shoots these – a hand-painted before and after illustration for weight loss, a garish deconstructed burger – through treelines, as if these were signposts in an urban wilderness.

Kirchheimer assembled the film’s soundtrack from recordings added later, but his sounds frequently seem like plausible soundtracks for what you’re seeing, with rhythmic sounds of trains in motion and dogs barking in the background. But the most prominent soundtrack is by jazz bassist Charles Mingus. The end credits don’t mention specific recordings, but they sound like they’re taken from Mingus’ classic Columbia and Atlantic albums, including some of his best known compositions like “Better Get it in Your Soul” and “Fables of Faubus.” Drum solos by Mingus regular Dannie Richmond are a perfect counterpart to some of the clattering sounds of the subway tracks. The music is cleverly mixed with ambient sounds, as the intense buildup of “Haitian Fight Song” is interjected with the sounds of New York City sirens.

New York can be a chaotic city, and Mingus’ music (and personality) a volatile match, but there are tender moments to both the city and the music. The film’s strong pacing owes as much to subdued passages, like a Mingus bass line accompanying a shot of a brick wall that serves as a canvas for shadows. These shadows seem still at first, but they soon move, cast by passengers waiting on a train platform.

Kirchheimer shot Stations of the Elevated in 1977 and edited the film in his spare time. The film was warmly received at the 1981 New York Film Festival, but its 45-minute running time kept it from getting a review in the Times, and the film is only now getting a commercial release. The director, who is now 83, made a series of documentaries about his beloved city, and considers Stations to be his best work. Anyone who loves New York City and the music of Charles Mingus should see it.