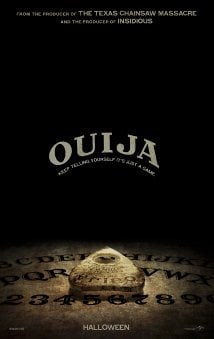 [xrr rating=1.25/5]Ouija boards have always made a far better prop than a premise. Even in earnest séances, the board is only a tool. Horror movies have played upon the Satanic Panic aspect of the toy, but the Ouija board was only given bit parts in the The Exorcist and Paranormal Activity. But hey, we’ve already got action films based on Battleship and Sony is developing an Adam Sandler movie about Candy Land—it’s Halloween, might as well give Ouija a whirl.

Ouija’s greatest sin is failing to pull from any of the hokey mystique surrounding the “spirit board.” The conjuring device has been around since the 19th century, has a long history of use by spiritualist charlatans, was hilariously burned (along with Harry Potter books) by fundamentalist Christians as recently as 2001, and has even been used to “dictate” a 560-page epic poem. This film pays no tribute to such lore. Instead, we’re once again stuck with a group of inane teenagers getting picked off one by one.

As with all bad horror movies, the “rules” are given to us at the outset. Ouija opens with two little girls playing with a chintzy version of the Hasbro game, where we learn that you must: 1. Never play it alone, 2. Never use it in a graveyard and 3. Always say goodbye. Cut to the two girls now as high school BFFs who’ve forgotten all about their late night séances. Or have they? Debbie (Shelley Hennig) finds a vintage board in the attic, quickly gets possessed and then dispatches herself after breaking rule #1. From there, we’re left with her bestie, Laine (Olivia Cooke), trying to make sense of the apparent suicide and lamenting that she never got to say goodbye. If only there was some way to contact Debbie on the other side!

With everyone’s parents (including the deceased’s) conveniently heading out of town for vacations or business trips, Laine convinces her pals to head over to Debbie’s vacant house to call upon the vintage Ouija board she found in her dead friend’s closet. They seem to make contact with some presence, or is it just one of them screwing around? We quickly learn through repeated reminders that the proper term for a triangle-y thing they all put their fingers on is a “planchette”—because teenagers are notorious for using precise terminology. From there, a bunch of doors mysteriously open or violently slam shut and gas burners ignite by themselves, while mirrors and shadows get pretty wonky.

As with most mass-produced scary movies targeted at children, this PG-13 mess kills off a handful of blemish-free cool kids we care nothing about. Ouija literally offers us no character development. All we know is that these teens are friends who go to high school together, like to eat pancakes and get really angsty when one of their own is mysteriously killed. The near-complete absence of adults is comical, especially when their kids are dying off in droves. And once the CGI monsters pushing the “planchette” around are revealed, you’ll end up longing for the contrived ambiguity of doors opening by themselves.

Throughout its interminably long 83 minutes, Ouija echoes aspects of the formulaic ‘90s teen horror films I Know What You Did Last Summer, Final Destination and Urban Legend. Complete with spooky attics and creepy basements, this is horror for children. There are rent prices in Monopoly that are more frightening. The history of Ouija boards is too interesting to be reduced to a bunch of kids freaking out about loud noises and boring ghosts.