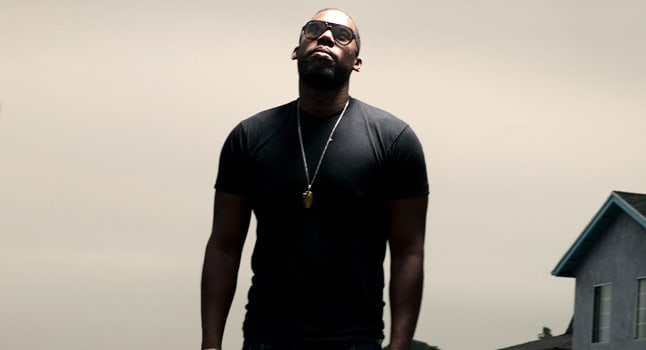 Walking into the Flying Lotus show at the Royal Oak Music Theatre just outside of Detroit, MI, my eyes were immediately drawn to the massive polygonal projector screen erected center-stage. I had seen clips of the producer’s recent shows, so I knew a little about what to expect: Flying Lotus would spend the show mixing from behind the screen within a box of otherworldly 3D visuals, his eerie silhouette dancing sedately to his signature complex electronic grooves. This was a far cry from his more traditional, less theatrical live approach in years past, and with jazz-soul opener Thundercat’s equipment arranged stage-left and a DJ booth stage-right, the massive, alien structure between them cast a pall of anticipation over the interminable three hours before the headliner would take the stage.

Thundercat, frequent collaborator of Flying Lotus and bass guitar virtuoso, took the stage with his two-piece band wearing a conspicuous wolf pelt for a hat. The trio transitioned smoothly between soulful jams, the sweeping basslines flooding the floor of the mix and burying the bright organ, kick drum, and the low-end of the vocals. The low-key R&B vibes periodically gave way to turbulent bebop interludes, flurries of constant drum fills and keyboard solos keeping the performance heated and lively. Thundercat ended his set with a thinned-out version of “Oh Sheit It’s X,” a highlight from his 2013 album Apocalypse, driving the upbeat track to the next level with a brisk and plucky bass solo. The band powered through a muddled mix and several performance flubs to deliver a mellow and dynamic performance overall, and though only the very front of the crowd seemed actively engaged, he and the band had clearly enjoyed themselves, smiling as they disappeared backstage to the sound of a spirited, crowd-wide chant of “Thun-der-cat! Thun-der-cat!”

Given Thundercat’s extensive musical involvement with Flying Lotus and taking into account the chaotic, rollicking ethos of his performance, you’d think he would provide a graceful lead-in for the tone of the main act, but when Flying Lotus took the stage in a tuxedo to greet the audience, eventually taking his place behind the projector screen wearing glowing goggles so as to make himself look ghostly and inhuman, it became clear that nothing would have suitably prepared the audience for the ensuing nearly two-hour performance.

FlyLo kicked things off with You’re Dead!-opener “Theme” before breaking out a varied set of huge beats culled from his prolific and expansive body of work. The jazzier tracks from You’re Dead! occasionally came through, and when they did, they came with deeper bass and more propulsive drums, allowing them to fit in with the heavier jams from 2010’s Cosmogramma and earlier albums. The producer also provided a few surprises in the set, including a pumping edit of Drake’s “Started From the Bottom” and a version of “Eyes Above” featuring an unreleased verse from Kendrick Lamar.

Every moment of the performance was accompanied by 3D video projection on the screens in front of and behind Flying Lotus, immersing him in frenzied visuals that ranged from multiple kaleidoscopic wormholes, lightning storms, and neon-lit landscapes to fiery explosions, cartoon robots, and Flying Lotus’ own maniacally laughing face with whitened eyes. Cosmogramma-favorite “Zodiac Shit” was accompanied by a particularly mesmerizing animation of transmogrifying astrological signs while Flying Lotus’ cartoon MC alter-ego Captain Murphy also made several appearances. The most complex visuals would often devolve into a pure solid color, white and black bars, or other simple patterns as the beats themselves morphed, giving the entire sensory experience an entrancing synchronicity. Behind the screen, FlyLo’s stark silhouette grooved to the music, occasionally disappearing into the elaborate visual worlds and then reappearing before a void of clouds, fire, or digital noise. All of this combines for what I have to imagine is one of the more psychedelic live concert experiences ever conceived.

My qualms that the obstructive nature of the stage set-up would detach the performer from the audience turned out unwarranted. The projector screen was less a barrier and more, as I’m sure it was intended, like a surrogate for the more active live expressions that a producer stuck behind a laptop is less capable of providing. The show is ambitious in concept (even for a musician who ups the ante with every album he releases), creating a more cinematic and visionary experience — a style far more suited for an individualist like FlyLo. 2012’s Until the Quiet Comes and now You’re Dead! have both pushed the artist toward musical statements with denser thematic unity and continuity of expression, so it’s about time his live show shared in that spirit.

That’s not to say there weren’t deviations from the show’s main conceit. Intermittently throughout the performance, Flying Lotus would climb down from his platform and walk out before the screen to rap Captain Murphy medleys, at one point toward the end of the concert actually hopping off-stage to mingle with the crowd while shouting into the mic. This is quite a feat for a man who has timidly admitted in recent interviews how apprehensive he was to sing on You’re Dead! (during his performance of “Coronus, the Terminator,” he even cut the beat as he swelled into a high note, the supportive crowd enthusiastically cheering him on), but it just goes to show that as his career progresses, FlyLo seems to get more comfortable being intimate, personal, and centered, to the point that he’s now just reveling in a heightened sense of self. At the end of the day — behind the hazy screen, the goggles, the psychedelic animations and the sinister motifs — that’s what it all is: a celebration of self and artistry.