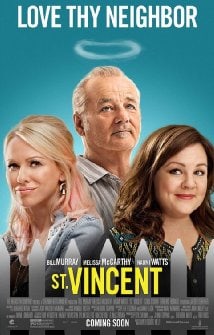 [xrr rating=2.25/5]One gets the sense from watching St. Vincent that no one is happier to see Bill Murray in it than writer-director Theodore Melfi, who opens the film with a close-up of the star that is so loving it’s disjunctive with the lame joke that his Vincent is telling bar patrons for the millionth time. Murray gives Vincent one of those accents that is unique to nth-generation descendants of Irish immigrants who live the northeast, those who have likely never set foot on Éire yet sport a vestigial lilt that apparently no amount of time in the melting pot will boil away. The voice lends his usual sarcasm a slightly musical quality, as if he muttered “Fuck you” into a pan flute.

Murray has simultaneously never looked older nor more intimidatingly physical than he does here, weathered by a life filled with cheap booze and getting by on whatever part-time paycheck or hustle can get his utilities paid for another month, but also hardened by that same hardscrabble existence. It’s a clichéd appearance, to be sure, but it’s bracing to see Murray outwardly embody the crotchety, antagonistic persona he’s made his trademark. But speaking of clichés, Vincent’s routine of boozing and betting on the ponies doesn’t hold a candle to the narrative that Melfi yokes onto his shoulders. Wasting away in his rotting townhouse, Vincent must suddenly contend with his new neighbors, freshly single working mom Maggie (Melissa McCarthy) and her frail, precocious (natch) son Oliver (Jaeden Lieberher).

When circumstances force Vincent to look after Oliver one afternoon, they soon strike up the sort of bond that cannot even be summarized these days without it sounding like parody. St. Vincent contains all the scenes you’d expect: sweet-hearted Oliver getting the shit beaten out of him by classmates for being weak, Vincent teaching him to fight, Oliver in turn teaching the old man to—can it be?—love. (As a sidenote, there’s something disturbing about how many of these films, about unlikely friendships between bullied kids and old, miserable bullies, hinge on teaching a bright but outcast child the benefits and thrills of breaking another kid’s face.) We’re also fed extraneous subplots meant to make Vincent more sympathetic, if still boorish, like supporting a pregnant Russian stripper (Naomi Watts) primarily through paid sex work or taking care of his Alzheimer’s-ridden wife, visiting her and paying for her hospice care though she long ago forgot who he was. These touches consistently undermine whatever subtle warmth might otherwise have built organically between the characters, always reducing Vincent to a simple portrait of an uncouth but fundamentally decent man.

It’s a shame, since Murray and Lieberher actually have some chemistry. Everyone else in the film is mostly window dressing, but the pair give fine performances that work best when they are unburdened by how badly the film wants the viewer to feel. Lieberher’s unfailing politeness, referring to adults as “sir” or “ma’am,” is an endearing and unforced demonstration of his innocence. Murray gives a showier performance, but he successfully parlays his comic edge into Vincent’s combativeness by never fully softening it. Vincent doesn’t turn into a doting, sweet man because of his time with Oliver; he simply offers a tight-lipped acknowledgment of respect for the boy. The film is sold as a showcase, but it’s in those moments, when everyone stops grandstanding for the camera, that St. Vincent shines.