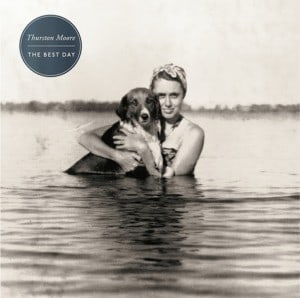 [xrr rating=4.5/5]In the beginning was not the word, but a drone: a tone to form the backdrop for all the sounds that followed. Some of those later voices may vie for attention, assert their individuality against the cosmic hum, but eventually they surrender and rejoin its embrace. The Best Day is a celebration of that drone and the rich textures that surround it. While Sonic Youth long used feedback and resonance to build cathartic walls of ecstatic noise, Thurston Moore distills that approach here to create a set of sonic meditations.

Amid the rich jangle of alternate tunings and ringing dissonance, it would be easy to imagine this as a new Sonic Youth album, to pretend that the band was back together. The Best Day breaks from Moore’s last couple of solo records where he explored cleaner acoustic guitar tones, and this project is certainly closer to Sonic Youth’s 2009 finale, The Eternal, than Moore’s Demolished Thoughts (2011). Even so, Moore isn’t trying to recreate the past or falling into old habits. More than just missing Kim Gordon’s distinctive voice and bass work, this music has a different intent. Where Sonic Youth harnessed chaos and cleansing discord for its own sake, Moore captures an idée fixe spawned from static and nervous energy and nurtures it until it transcends its roots. Just as the Velvet Underground painstakingly created their own musical language to convey their experiences —a burning itch, a seductive languor or a glimpse of oblivion—Moore uses his guitar to search for the patterns that express his current mental space, with ideas like the acceptance of outside forces and the release of expectations. Sonic Youth fans have already trained themselves to surrender to the swirl, and they’ll find plenty to enjoy here, but The Best Day is ultimately more coherent and less nihilistic than the band’s classic material.

The first track, “Speak to the Wild,” invokes the album’s meditative mood with opening harmonic chimes that invite us to center ourselves. Then the song launches into the rhythmic two-cycle flow of the verse: strumming broken by brief pauses, the guitars providing the focusing breath. Moore’s terse lines have a Zen clarity (“Remove your rings/ And meet us near the fire/ Extinguish things/ Of earthly desire”) immediately followed by cryptic allusion (“The King has come to meet the band”). The guitars are arranged as foreground and background voices that are locked into near unison and the piece has plenty of open space to let them ring. The solo break is restrained, starting with simple phrases against a buzzing drone, and then it slides into a staccato meandering riff before locking into a crystalline Robert Fripp-style section. The intensity builds but finally collapses into a variation on the chimes from the start. Instead of signaling the end, the song kicks off all over again to remind us that time is a cycle and everything repeats.

As The Best Day develops, Moore varies the sonic palette, but the album maintains a taut drive that never allows for complacency. They aren’t all as meditative as the first couple of songs; the title track, for instance, leaps between a thrashy deconstruction of jug band music and a motorik, upbeat alt-rocker. But the shift in tone still isolates a clearly identified mood to settle into. While most of these tunes take their time to fully soak into the listener’s consciousness, there is one tight little morsel that doesn’t even reach three minutes. “Detonation” would have fit well on The Eternal, with sloganeering lyrics and a snappy new wave edge. The contrast between the jabbing verses and the accelerating instrumental spiral creates a strange sense of disconnection for such a short tune. While this fun bit of fluff easily fits into Moore’s oeuvre, it feels a bit out of place in this context. If nothing else, though, it provides a counterbalance that shows how well the rest of the album holds together.

If “Detonation” is the shallowest point, the peak is the seven-minute instrumental, “Grace Lake.” First, a fluttering sprinkle of notes proves that Moore’s acoustic experiments were worthwhile as they suggest the glint of sunlight on the lake surface. In counterpoint, a purposeful motif arises, giving the song direction. The band effortlessly navigates through a series of changes, accreting momentum and meaning along the way. Finally, they break through a barrier, moving the track into full-on psychedelia. The bass throbs, fractured delay-box echoes gurgle and a guitar hangs on a single, modulating tone. As it swells into feedback whine and everything else slips away, it’s like we’re at the beginning of everything. This is Moore’s love song to the everlasting drone. Then the spell breaks and we’re back on the lake, but the memory of that tone lurks at the edges, like background radiation.