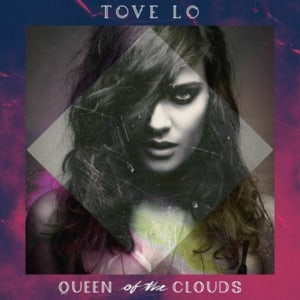 While Taylor Swift and Meghan Trainor compete for the affections of pre-tweens and boys’ cross-country teams across the nation, Tove Lo, née Tove Nilsson, has been quietly stealing spins. “Habits,” a sickly ode to lost love and Twinkie benders, is almost laughably against the (whole) grain of Swifitan and Trainorite poptimism. “Habits” could be compared profitably with contemporary “Chandelier”––both are portraits of broken women descending into nightclub hell, But its real kindred spirit and predecessor might just be Kid Cudi’s “Day ‘N’ Nite.” Tove Lo shares the lonely stoner aesthetic of that hip-hop oddity, as well as its perplexing combination of self-deprecating lyrics and slightly aloof delivery. So even if Tove Lo gets high on the regular and shotguns Swiss rolls, she is quick to take the piss out of anyone foolish enough to give her shit. Throughout her debut LP Queen of the Clouds, Nilsson channels an Emma Bovary-esque detachment with a high, near naive idealism that expresses itself in irony and violence towards anything smacking remotely of cliché.

The album title evokes a fairyish levity and a flight from responsibility, but also a spiritual altitude and judgment. These opposing forces constitute a familiar problem for the cerebral yet romantic singer-songwriter: where will the poet fly––too smart to believe in true love, and too human to love a wall? To answer that question, she needs equal parts generosity and discrimination, forces that are not yet balanced in Nilsson’s songwriting.

Nilsson delights in pushing bougie buttons, sometimes to a reactionary extent. The one-two of “Like ‘em Young” and “Talking Body” dismisses the notion that the best relationships are based on a meeting of the minds, the go-to line for younger women defending crumbly relationships with older men. Her invocation of mortality is slightly grandiose, but it’s completely to her credit that Nilsson defines herself against this group. Elsewhere, she is contemptuous of wealth and comfort. In “Moments,” she expresses her frustration at having grown up in privilege. Still, she carries herself in the pretense of well-adapted wife material: “On good days I am charming as fuck.” The likelihood that this one-liner will be taken up on Tumblr and turned into Tegan and Sara gifs does not detract from its lyrical value. In “The Way That I Am,” Nilsson holds a lover in contempt for feigning moral superiority, but, effecting an emotional voice crack that would put even ‘Yoncé on the defensive, concedes to her true feelings: “I love you anyway.” The biting disaffection of “Habits” is tempered by Nilsson’s fragility: mocking hypocrites is a way to forget heartbreak.

The album’s least successful tracks are its upbeat ones. Although not without its charm, the Kelly Clarksonish bounce of “Got Love” does not fit Nilson well. “Love Ballad” is a chirpy endnote to an otherwise solemn third act that seems to anticipate a tragic, swelling chorus but turns out to be mushier, a “one true sacrifice” which will “never get old.” Nilsson frequently defaults to cliché, which is a problem when contempt for convention is your major theme. Lyrical zingers like “We fuck for life” and “charming as fuck” compete with banalities like “all is fair in love and war” and “never play[ing] the safe card.” This recourse to formula could be a result of hasty production, as the album is an expansion of the “Truth Serum” EP released just six months earlier.

Any doubt about Nilsson’s lyrical ability should be allayed by “Habits,” and the single is a case in point that her strengths as a writer are anti-romantic. Consider the first two lines: “I eat my dinner in the bathtub/Then I go to sex clubs. The image intriguingly refuses to scan, perhaps not so much on her dining room choice, as the sequence of eating dinner and then going to sex clubs, as if this were as natural as going to a Sunday matinee. By time she binges on Twinkies and regurgitates them in the aforementioned tub (does she sleep there?) she’s won us. A vignette of skulking around playgrounds and cuckolding type-A Swedish moms is another lyrical home run. The strong lyrics of “Habits” may be a product of the strong music. Where Nilsson falls into cliché is precisely where her melodies are merely adequate. Whatever the case, these are early formations for the Queen of the Clouds. For now, with the current superabundance of intolerably sunny pop, we might thank her for providing a bit of shade.