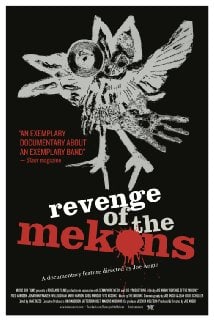 [xrr rating=3.5/5]The Mekons’ excellent 1991 album The Curse of the Mekons was going to be their second American release on A&M Records. Longtime Mekon Jon Langford made the fateful decision to learn the language of ancient runes and incorporate an actual curse as part of the album’s cover. Concerned individuals warned Langford not to play with potentially nefarious forces, and they may have had a point. Before the album was released, the record executive who had signed them was fired, A&M dropped the band and Curse wouldn’t be released in the US until 2001.

This is a moment of relative dramatic tension in Revenge of the Mekons, director Joe Angio’s fond but fairly placid documentary. Formed in 1977 out of the same scene of Leeds art students that spawned Gang of Four, the Mekons are a long-running group of anarchic also-rans, perennial critic’s brides but commercial bridesmaids. A label rep notes that if a Mekons album sells eight thousand copies, that counts as a best seller. Along the way, various turning points in their career seemed to mark the band for a commercial success that they never actually found. For instance, a young and snotty U2 opened for them, and Langford retrospectively recognized the band as “rubbish,” with premature arena gestures that wouldn’t amount to anything. When Bob Last of the Fast Product label wanted to sign his band, Langford was accurately self-deprecating when he insisted that Last should instead sign Gang of Four, who were more of a proper band. Last replied, ”I don’t want a proper band. I want the Mekons.”

That impropriety is part of what fans have always loved about the Mekons. Mary Harron, a music critic-turned film maker who reviewed an early Mekons show for Melody Maker, describes their enduring and endearing appeal as a “strange combination of sophisticated theory and technical incompetence.” The band essentially found their voice by playing music – pop music, country music – wrong.

Revenge can’t help but be about the band’s endurance and resilience. But where the band’s major theme was once desperation and fatigue, the various continuing Mekons do not seem at all defeated. Despite or perhaps because of the lack of commercial pressures, the band members simply seem to be having fun. This is great for Mekons fans like me, but non-fans may wonder where the drama is. There is drama, but only if you know the story. Current and former band members explain how the group’s interest in English folk music led to their second act as alt-country pioneers. An early version of “Last Dance” demonstrates that the band had not yet found the sound that would carry their career to the present. Fans who know what’s coming can see this sequence as dramatic tension whose release is an inevitable but still powerful musical high: when the first notes of “Chivalry,” from the band’s 1985 masterpiece Fear and Whiskey, play on the soundtrack, it’s like the scales have fallen from their eyes along with their amateur musicianship.

The film’s talking heads include literary figures like Jonathan Franzen and Luc Sante, as well as comedian Fred Armisen, who it may surprise you was once married to Mekon Sally Timms. An intriguing sidebar leads us to Tajikistan, where longtime Mekon (and current Public Image Ltd.) guitarist Lu Edmonds works with indigenous folk musicians to build them an affordable modern recording studio.

Angio filmed the Mekons over the course of six years, and saves his best stories for the final act of his documentary. The revenge of the title may be a hopeful fan’s attempt to lift a curse. Despite the band’s shaggy-underdog status, the director doesn’t find the kind of compelling human narrative that makes music fans take up abandoned musical puppies they’ve never heard bark before. But the documentary is a solid portrait that is a must-see for Mekons fans.