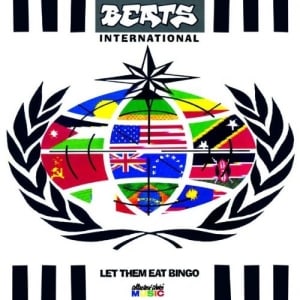 Before donning the Fatboy Slim alias in 1996, Kent’s Norman Cook was exploring the indie-rock underground as a member of UK’s the Housemartins. As the collective’s bassist, it was the bottom end that was inspiring Cook. But, it wasn’t until the dissolution of the Housemartins that Cook began dabbling in UK’s dance music scene, which was reaching a new mass audience across Europe in the late-‘80s. The bassist/producer didn’t immediately transition into the raucous big beat and rave techno that still keep the Fatboy Slim alias relevant in club land today—that would take a few more trips to Ibiza—but chose to infuse his artistic palette with some worldly fare as the leader of Beats International.

With Public Enemy, Sinead O’Connor, A Tribe Called Quest, Sonic Youth, the Pixies and Nick Cave all releasing acclaimed albums during 1990, it was an amazing year for music that has served to obscure the accomplishment of the Beats International debut LP, Let Them Eat Bingo. With college radio in effect and music videos actually being shown on TV, there was certainly room for explorations across folk, pop, new wave and hip hop, yet Beats International managed to avoid all of these classifications. As the name suggested, their sound was a coalescence of joyous tones pulled from across the globe; from Afro-Cuban funk (“Dance to the Drummer’s Beat”) to some pumped up new jack swing (“Blame It on the Bassline”) and sun-drenched house (“The Ragged Trousered Percussionists”). Comprised of Cook, vocalists Lindy Layton and Lester Noel, keyboardist Andy Boucher, plus rappers DJ Baptiste (The Crazy MC), MC Wildski and a rolling assortment of session musicians, Beats International created a cacophony of sound that resisted the impulse of dulling the individual elements. Like the rumblings of most any downtown center, this chaos turns to beauty with the support of the right conductor.

The notion of fusing these many forms of music is daunting, yet the result never takes itself too seriously. Embodying that delectably cheesy synth-pop that escaped the late ‘80s and early ‘90s, “Before I Grow Too Old” is kickstarted with a wonky synth line, balanced with some post-punk riffs and then shows its innocence with the squawks of a digital rubber ducky. That sense of humor runs through the album, even during album standout “Dub Be Good to Me,” where the track’s eloquent trip hop and Layton’s charismatic delivery is spliced with the static of a deserted radio dial and some near-dreadful humming.

This approach helps the collective deliver stark messages without going too dark. During the poolside vibes of “For Spacious Lies,” Noel croons, “You can kill, wheel, deal, steal if you believe/ The end lies just 65 miles north of Tel Aviv/ Whether coffee, missiles or cocaine/Do you buy and sell lies just the same?/Your conscience is as foul as the lead that you breathe”. The message of international black market dealings and grievances is heavy but veiled beneath the track’s crystalline blue instrumental interplay.

Lasting just over two years, the genre-bending nature of Beats International was short-lived. However, the courage to explore across the spheres of indie-pop, club music, and hip hop remains strong in at least one new release, SBTRKT’s Wonder Where We Land. Since the release of Let Them Eat Bingo Cook has gone on to celebrate a near three decade career, and SBTRKT has the potential to do much of the same. In an era when criticism is instantaneous, and can be quite cruel, it is those that challenge themselves that will push the entire community—even if those original works aren’t always appreciated as such.