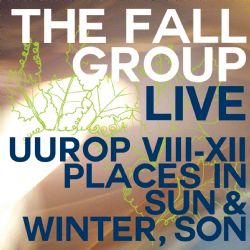 [xrr rating=3.5/5]The Fall’s 30 studio albums make up only about a third of the total releases from Mark E. Smith and whomever he has hired and fired since 1976, when he founded this ornery, restless art-punk/ post-punk outfit. The rest of the group’s complicated discography consists of compilations and live albums, many of dodgy quality and issued without Smith’s consent. A new live album, which Smith himself curated himself, implies a firm direction taken by the band’s leader.

The group’s 12th live album documents the longest stint by a Fall line-up ever. Drawn mainly from the Fall’s last four studio albums, Live: UUROP VIII-XII Places in Sun & Winter, Son lacks the scrawled album liner notes or art (except under the CD tray) of many Fall records. Perhaps homages by Pavement and now Parquet Courts have led Smith to streamline his albums visually and musically.

Without any guidance, the listener has only the title to suggest European origins and seasonal variation for when these twelve live tracks appeared. The stark typography and cover art strip down the graphic presentation. So do many of the songs, as the latest iteration of the band favors a gritty, arid approach.

Starting with a chiming “Wings (With Bells),” the venerable, allusive 1982 track from Perverted by Language replicates the dense, historical erudition of the original, enriched by, of course, bells. Smith sounds happy to be on stage, too, even if many of these tracks cut off any connection with the audience. Its prevalent ambiance reveals a boxier, muddier feel to the sound than the shinier studio versions. The album arguably sounds better than many live Fall records, but fans have come to expect the band to issue even official live releases with compromised audio fidelity.

After all, The Fall stays iconoclastic. “Auto 2014 Chip Replace” feels jaunty and experimental, integrating as its title suggests bleeps and jolts, with squeals from Smith’s wife Elena Poulou on keyboards. As on studio versions from this lineup, Poulou’s contributions mix in blips and squawks, the toy-like nature of her instrument blending well with her lurching bandmates.

Poulou’s Greek-accented backing vocals also enhance the demented “Amorator,” a song about marital intimacy and squabbling that suits Poulou’s good-natured barbs and taunts. Like many Fall albums over the past twenty-five years, the new one falters. Smith may delightfully boasts at the beginning of “Jetplane,” but the song hits turbulence rather than cloudless sky. “Irish” is suitably shambolic, but this reviewer of Irish lineage dutifully notes that it falters, too.

Three songs average seven minutes, four if you count “Jetplane,” which runs 3:45 but feels like seven. Peter Greenway’s clattering guitar fights against the murk of the sprawling “Cowboy George” and sometimes succeeds. The Fall conjures up the spirit of the Velvet Underground lineup in which Nico and John Cale contended with Lou Reed. A similar creative tension fuels the more eclectic song structure and sonic blend of the Fall, but may wear out a listener resigned to a bleary soundboard tape to discern the lyric wit or scorn in Smith’s mumbles. But it may reward patient fans who sign on for a treacherous voyage under a stern, sly taskmaster and know what to expect from Smith and company.

The desiccated “Chino” warps a Western tune, showing Smith’s incorporation of country and rockabilly influences into the electronic scene that energized so much of European music during The Fall’s parallel career. It can make for a tiresome companion, but after a long, bleak sonic trek, a mirage appears. “Sir William Wray,” a bow to guitar hero Link Wray, crackles with welcome life.

The pairing of “Fifty Year Old Man” and “Wolf Kidult Man” plays off Smith’s middle-aged rants (he turned 50 in 2007), delivered in trademark groans and moans. They again sustain what his audience expects, as if from a Beckett protagonist before the limelight, full of learned asides and staccato bursts of grumbling.

While the pace may flag, “Reformation” rallies. Co-written with bassist Rob Barbato of Darker My Love, it blends Krautrock with waves of menacing tension integral to Darker My Love, locked down by Smith and company’s repetitive groove. Finally, Keiron Melling’s drums and David Spurr’s bass push along Greenway’s guitar, and all works well.

Closing with “What About Us,” the call-and-response of Smith and Poulou on the original version gets muffled here, but it’s fun to hear her spit and yelp above the boxier studio version. Fun may not be the first word associated with The Fall, but those who have accumulated, as I have, the many recordings and reiterations of this unpredictable band under its unwaveringly resolute leader will find this an appropriate testament to the band’s most durable lineup yet. But that may all change tomorrow.