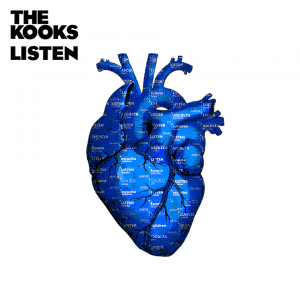 [xrr rating=2.0/5]The Kooks have known how to churn out dancey pop rock since they first arrived on the scene with Inside In/Inside Out in 2006. Still, the dance floor their sound provided was more ‘60s mod club than it was a discotheque. From the first seconds of opening track, “Around Town,” you know Listen is going to be a much glitzier night on the town than anything else they’ve recorded.

To further show off their evolution into a band who now finds Sly and the Family Stone as important a flagstone as anyone from the British Invasion, “Forgive & Forget” begins with the downward acoustic strumming familiar to anyone with even a passing affiliation with the group. Before you can blink twice though, it’s transformed into the sort of song that would fit well playing over the end credits of Purple Rain.

Listen may be the Kooks’ best album because it’s the first one where they’re being completely honest with themselves. On their first few records, they seemed to think they were the kind of band who could give their listeners some form of street cred. They arrived at a time when power pop British rock ‘n’ roll was enjoying another resurgence, but their name could never function as currency. They were about as edgy as the Bee Gees and didn’t have a punk bone in their bodies. So Listen sounds like the Kooks finally letting go of any indie kid reservations and making the fun, summery pop record they always had in them to begin with.

Can this translate into schmaltz? Of course! This isn’t going to top any critics’ lists, I’ll tell you that. Eye-rolling tropes abound. “See Me Now” is a piano ballad Sara Bareilles would probably write off as too cheesy and the “down-down-diggity-down-down” chorus of “Down” is more embarrassing than anything else. “Bad Habit” is their entry into the new genre characterized by its insistence on “oh-oh-ohs” à la Philip Phillips and Mumford & Sons. For God’s sake, they end their album with a song called “Sweet Emotion,” which sounds like Maroon 5 homogenized for elevator airplay.

Luckily for the Kooks, their occasional forays into pop’s usual missteps are supplanted by their occasional mastery of its best tendencies. There’s the hook-to-end-all-hooks guitar solo in “Are We Electric” and the dopamine-releasing choruses of the aforementioned first two tracks. “Westside” is as good a synthy pop song as most of the tracks on Phoenix’s last record. But the reason any of these stand out is that they’re the only tracks which display much progress in the band’s sound. Infiltrating them is the spirit of disco, soul and R&B and it’s a shame this shot in the arm doesn’t last the rest of the record.

Listen is a Kooks album worth listening to primarily because it’s the sound of a band giving into the pressure. Are their best songs all still on their debut? Yes. The struggle between indie cool and mainstream success made some of those songs both interesting and relentlessly catchy. On Listen, coolness is no issue and it looks like their search for the catchiest song of the century may be relenting a bit too.