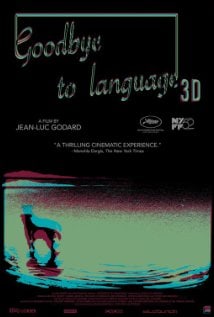 [xrr rating=4.5/5]One of the most confident debuts of all time, Jean-Luc Godard’s Breathless is a radical film hiding out within the trappings of a conventional one, its daring destruction of tropes doubling as a satisfying emulation of those formulas. In the nearly 55 years since its release, the Swiss director has become increasingly interested in destruction and less concerned with satisfaction, gradually stripping away any traces of conventional structure, shaping a dualistic cinema of contrasts and contradictions, driven by a sharp tension between his affection for images and his disgust with their mendacious capabilities. This culminates, at least for the time being, with the provocative, utterly singular Goodbye to Language, a film that stands as uniquely confrontational, even by the director’s strident standards.

Full of ideas posing as jokes and jokes pretending to be ideas, the film makes full use of tricks Godard has incorporated in the past, from the habit of messing with audio tracks to the dense accumulation of inter- and subtitles, fussing variously with one aspect of cinematic structure after another. Audiences in the 1960s initially embraced these assaults, enjoying the dissonance between his early, comparatively playful structural attacks and the sleek, referential movies that contained them, but that relationship soured early on, around the time of his disappearance into purely political cinema with the Dziga Vertov group. In the years since, he’s labored alternatively as a reclusive experimenter, an avant-garde instigator and a cantankerous old master, while never giving up the drive for innovation that has fueled his work from the beginning. Like Godard’s best films, Goodbye to Language is great in spite of itself, its moments of transcendence and brilliance inseparable from the rascally prankishness and insistence on undermining any hints of drama and coherent narrative.

While not his greatest late work, Goodbye to Language ends up feeling like a culmination, both because it embraces all previous violations of form and introduces a staggering a new one, using 3D to turn depth-of-field into a dizzying new means of knocking the audience off its axis. Nearly every image here is disorienting in some way, with otherwise ordinary items shoved to the back of the frame or jutting out of the screen, the ordinary relationship of objects ending up hopelessly skewed. The effect is totally opposite to that of most 3D, which seeks to enhance the illusion of important, expensive movies, adding to their spectacle and scale. This film feels important in a perversely small sense, the way its low budget aesthetic and basic setups clash with the bombast of a technique usually intended for mass-market consumption, using it to achieve a contrary effect.

The slim story is standard-issue Godard, playing out across a series of vague situations in which stylized characters spout shards of literary quotation, each conversation playing out as a puzzle. One section concerns a couple, who may be married or may be having an affair, as they range (mostly naked) around their suburban house, chatting and arguing. It’s an Edenic depiction that plays on innate ideas of innocence, and one that Godard repeatedly undermines with instances of disjointed ugliness, smashing up his compositions and notably indulging in a few choice poop jokes. The other scenario is an even more direct representation of purity, centering on the director’s dog Roxy, who scampers around a variety of landscapes, rolling in the snow and playing in beds of damp leaves. Aided by the alternatively beautifying and alienating effects of the 3D, all this feels both insistently familiar and distancingly strange—like home movies imbued with funhouse visual effects and an aggressive philosophical bent. And Godard matches that novelty with repeated references to his past works, from the irritating seagull caws of King Lear to the slow-motion effects of Every Man for Himself and distorted stock footage of Historie(s) du cinéma, some of it directly sourced from the film itself.

All this is fittingly driven by a firm focus on contradictory methods. The amount of oppositional forces Godard fits into the film is astounding, and the sheer level of unverifiable information being delivered forces the viewer to either disengage or perish, forcing the film into two separate planes, one intricate and overwhelming, the other purely aesthetic. Most of the pleasures of Goodbye to Language occur on the latter plane, which is transportingly beautiful as often as it’s forcefully ugly, and contains the most original use of 3D you’re likely to see anywhere. Whether separating the snowflakes from a grainy smart phone image or using a GoPro to turn a shower into an assaultive three-dimensional experience, Godard pulls off tricks that seem obvious in retrospect, but have never existed elsewhere previously. Like his now-conventional use of jump cuts or the casual mixing of fact and fiction, he continues to premiere techniques that will likely filter their way into the mainstream, even if his approach keeps him on the fringes. Moving into his mid-80s, Godard keeps pushing, exploring and experimenting, remaining persistently enlightening and infuriating by turns, while breaking his movies down into ever more fascinating fragments.