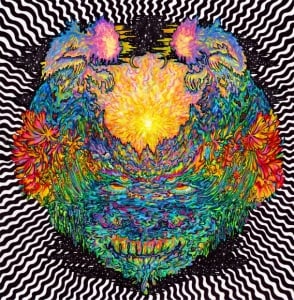 [xrr rating=2.0/5]On their Facebook page, Meatbodies describe themselves as “fast fast fast loud loud loud.” It’s an accurate description. It’s also indicative of the music on their eponymous debut, brevity that leaves the impression not of stylistic minimalism but of a group that has nothing to say. The songs are loud, brash and played with a furious speed, but this is showy surface without substance. The group’s driving helmsman, Chad Ubovich, is clearly a first-rate guitarist, capable of eliciting all manner of squalls and animal cries from his instrument. Yet relentless riffing can’t help but get plodding when it’s the sole focus. This raises another issue: while the instrumentalists are technically talented, their compositions are uniformly dull. The band playing at the local bar on a Thursday night might be composed of virtuosos, but that doesn’t inherently make them compelling.

Meatbodies’ approach is plainly derivative. Affection for ‘60s acid rock and proto-punk spawns the group’s sound. The one-minute introductory track “The Archer” may be misleading. It unfurls as an instrumental slice of spacey psychedelia, but this is pummeled aside by “Disorder.” An amalgam of the Buzzcocks and Thee Oh Sees, the cut establishes the record’s paradigm of instruments playing with such Benzedrine-fueled rapidity that they seem to be racing while nasally, helium-high vocals are nearly buried in the mix. Much of the album tries too hard to grab your attention with sheer abrasiveness and guitar acrobatics, but it defeats its own purpose as it goes by so fast that nothing sticks. When the songs are piled up one after the other with so little variety to distinguish them, the monotony turns everything into background clatter.

Thee Oh Sees’ influence borders on outright aping with “Mountain.” It starts with jackhammer bass lines rumbling ominously before searing guitar parts fracture the rubble. As the guitars spiral out, they serve as depth charges to the bedrock rhythm. Ubovich squeals like John Dwyer in reciting observations of a behemoth, a winding road, and climbing the titular mountain. The song also exemplifies the record’s most egregious sin — not sounding particularly unique is one thing, but being mistakable for another act is a different animal entirely.

Later in the album, “HIM” is more serrated riffing dueling with clamorous drums, although there is some Syd Barrett-style whimsy glimpsed between solos. Things get heavier and slower on “Tremmors,” which opens with some innocuous strumming before turning into a sludge-churning grind.
The record is half over before its few worthwhile songs emerge. “Gold” largely adheres to the chugging template, but manages to stand apart. Maybe it’s the catchy (if still largely indiscernible) chorus or the guitar tones that sound like the skittering sound effects from a vintage sci-fi movie. “Two,” a bluesy swath of vertigo, is comparatively mid-tempo with an eye toward song structure rather than sheer guitar noodling. There is still plenty of that, but it’s done to serve the song. At the midpoint, it detours unexpectedly to Ubovich singing delicately above an effervescent melody: “I’m always looking down/ And nobody notices.”

The album’s highlight is “Dark Road,” a creepy tune worthy of the witching hour that displays a subtlety and restraint absent elsewhere. Starting with acoustic strumming and cooing vocals, it builds in its ghostly narrative toward some well-earned electric roiling. “I’m losing my mind/ Goodbye starshine,” Ubovich sings eerily, as though he’s a deranged hitchhiker walking down the secluded roadside. Released with Halloween just around the corner, its ambience is pure campy fun. It’s a shame that the album’s best track is an anomaly. But it does shows that Meatbodies can do better. Hopefully, they will.