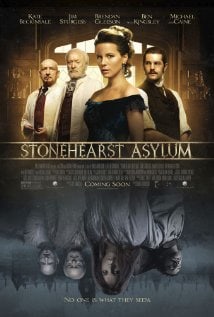 [xrr rating=2.5/5]When Brendan Gleeson’s Oxford professor tells his psychiatry students to “Believe nothing of what you hear and only half of what you see,” that message is naturally meant more for the audience than his wide-eyed pupils. Based on Edgar Allan Poe’s short story “The System of Doctor Tarr and Professor Fether” and helmed by director Brad Anderson (The Machinist), Stonehearst Asylum aims to be a psychological thriller perfectly timed for Halloween moviegoers. And there is no lack of potential here. Including Anderson, the film boasts an all-star British cast with Kate Beckinsale, Jim Sturgess, Ben Kingsley, Michael Caine and Gleeson each lending their talents to this Victorian gothic horror. Unfortunately, the film is low on scares and plods through a contrived script that consists of two decent twists with an incomprehensible plot between them.

The film opens on Gleeson’s lecture, which introduces turn-of-the-century alienism and the treatment of the mentally unstable. Gleeson wheels in his first patient, the hysteric Eliza Graves (Beckinsale) who has been sedated with heroin for these proceedings. Insisting on her sanity, Eliza is manhandled by the professor, sent into a fit and surreptitiously wheeled out for the next patient as the students look on. Three months later one of those students, Edward Newgate (Sturgess), arrives at the ominous and secluded Stonehearst Asylum on Christmas Eve to begin an internship and learn practical psychiatry from the institution’s superintendent. Taken under-wing by Dr. Lamb (Kingsley), Newgate takes a tour of the facilities with Lamb and the seedy Mickey Finn (David Thewlis) and witnesses an asylum like no other.

Stonehearst under Lamb uses none of the treatments typical of turn-of-the-century medicine. Padded cells are empty. Straight jackets and the force feeding patients of are things of the past. Newgate is drawn to these progressive methods but at the same time is taken aback by the concept of supporting patients’ delusions for the sake of their overall happiness rather than forcing them into normal behavior. He can’t complain, though, when those methods allow the beautiful hysteric from the lecture to play her piano daily. Newgate sees her and, despite her debilitating fear of touch and even attention, falls in love with her instantaneously. The first twist in the film sees Newgate clandestinely exploring the asylum at night, guided, naturally, by a single candle. Down in the dank dungeons, Newgate discovers that the real superintendent, Dr. Salt (Caine), and his staff were imprisoned by Lamb and other high-functioning psychopaths. Unsure of what to do, Newgate continues building a rapport with Lamb for fear of being locked up with the others while secretly planning to escape with Eliza.

Nevermind the fact that Eliza doesn’t want to escape with him. She is still uncomfortable with his occasional compliments and freely admits that she belongs in the asylum. To Newgate, she is just far too beautiful to be insane. Too much time is spent here with feeble and repetitive scenes where Newgate attempts to convince Eliza not only that Stonehearst is unsafe but that he is not a threat to her. His obsession quickly gets out of hand and becomes a clear point of contention in this script already rife with inconsistency. And while the final twist explains Newgate’s obsession, it doesn’t excuse the forced happy ending for these two characters.

The most appealing aspect of the film, which, if properly expanded, could have made Stonehearst Asylum bearable if not thought-provoking, is the conflict between the inhumane practices of Dr. Salt and his brand of psychiatry and the progressive thinking posited by the insane Lamb. Lamb’s references to the dawn of a new century emphasize the fast-approaching changes in the treatment of the mentally ill, but it’s the flaws inherent in both methods and Newgate’s navigation of the situation that remain most engaging.

Stonehearst Asylum succeeds as a horror film in the very basic achievement of establishing a dark and gloomy atmosphere. The overall style of the film complements the melodrama on display from Sturgess and Beckinsale, but never once does Stonehearst delve into the creepy or the scary. And that is perhaps not what Anderson ever intended. But unfortunately, scary or no, the film fails to develop any meaningful plot points beyond the predictable twists. There are no mind games to speak of and very few genuine surprises. The basic premise is solid, but when it diverts from Poe’s story the film doesn’t seem to know where to go. Even the stellar cast of Kingsley, Caine, Thewlis and Sturgess have no way of remedying the meandering and repetitive script.