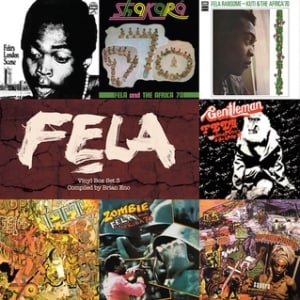 [xrr rating=4.5/5]Knitting Factory’s box sets of vinyl Fela Kuti reissues have come with disclaimers boasting of the celebrity input of curators—Questlove, Ginger Baker and now Brian Eno—but the sheer quality of nearly all the Afrobeat pioneer’s releases makes the task a can’t-lose proposition. From early, exploratory recordings through a late period as elder statesman of acid funk, Fela’s music displays consistent innovation, lyrical directness and musical complexity, the work of one of the 20th century’s few musical geniuses. Eno’s selection offers a few outliers at the poles of Fela’s career, but the bulk of the choices comes from the artist’s mid-’70s peak, when he’d successfully fused his Western and African influences into a sound wholly his own.

The inclusion of the earlier recordings show Fela gradually edging toward that sound. Fela’s London Scene captures Fela returning from a successful U.S. tour to the city where he received his musical education. But if Fela sounds more accomplished and seasoned than the artist’s early recordings with first band Koola Lobitos, he nonetheless leads Africa ‘70 through a similar split of jazz and highlife. He introduces opening track “J’Ehin J’Ehin” like an old-school bandleader, calmly relating some information about the song before a relaxed electric guitar slides in on the back of clacking percussion that ambles along before a big band swell rocks the song at the 5:30 mark. Most of the other tracks match this style; Fela always made dance music, but the likes of “Egbe Mi O,” with shuffling contributions from Ginger Baker, is less of the baby-making variety that was Fela’s bread-and-butter and more suited to venues where you need a jacket to even get through the door. Still, the compositions are swinging, and the album even contains a glimpse of the Fela to come with “Buy Africa,” which starts to wrangle the horn section away from brassy, finger-snapping jazz and more toward the punctuating political thrusts that would characterize his Afrobeat sound. The lyrics, too, are indicative of a shift, a direct plea for Africans and foreigners alike to support African industry over the multinational corporations that pillage the continent in the place of decamped colonial powers.

London Scene may display the artist still finding his voice, but it does offer the elemental building blocks of Fela’s career and can be heard even on a consolidated Afrobeat work like 1973’s Afrodisiac, recorded the same year as the aforementioned album, and also in London. Folk tales sung entirely in Nigerian, the tracks lack the accessibility of Fela’s usual pidgin lyrics, but they are some of his most driving compositions. Tony Allen anchors “Alu Jon Jonki Jon” as the horns blurt in James Brown fashion and keyboards and electric guitar overlap in fuzzy solos. Fela sings with verve and takes a saxophone solo with equal gusto, his slurred lines adding a sensual force that thoroughly overcomes the limitations of Fela’s reed abilities. Better still is “Jeun Ko Ku,” Fela’s first major hit, which doubles down on the Brown-isms to the point that you almost wonder whether the J.B.’s played on it under pseudonyms. Its delights are nearly endless, from Allen’s crashing cymbals to watery trumpets that sound as if they washed up on Lagos’ beaches. Rolling keyboard chords add yet more jittery energy, which the horns hammer home with such ebullience that hips will gyrate independent of conscious will. “Je’nwi Temi” also introduces Fela’s strident rejection of Nigerian authority, assuring his listeners that he will not be silenced.

Nonetheless, it is 1972’s Shakara that provides the clearest link between these recordings and the others included on the set. “Lady” is pure Afrobeat, all interlocked layers of shuffling instruments that splits the difference between hypnotic and wild. These extremes exist in many Fela recordings, but here the sonic indecisiveness matches the conflicting interpretation of its lyrics, which detail the modern African woman’s increasing self-reliance, a trend Fela puts down to Western influence. But if the notoriously sexist Fela sees this as a violation of traditional African gender roles, lines like, “She go say im equal to man / She go say im get power like man / She go say anything man do, imself fit do” nonetheless sound exhilarating and empowering, whether their singer approves of them or not. His stance is also ironic, given the crucial role women played in shaping Fela’s political consciousness, from his activist mother and American Sandra Izsadore, who even gets to sing the lead on the title track of 1976’s Upside Down. The pidgin lyrics sometimes sound awkward in Izsadore’s American mouth, but her mere presence is a radical change-up in Fela’s musical power structure, and it also lends greater credence to the song’s subject matter, contrasting how put-together other nations seem to be in relation to deliberately mismanaged African countries. The song focuses on political and post-colonial incompetence, but the fact that Izsadore sings it reveals discrepancies in cultural barriers, some of which Fela wished to see maintained.

“Lady” also provides a counterpoint with Fela’s first true masterpiece, 1973’s Gentleman. “Gentleman” opens with his most chaotic, technically lacking saxophone solo, with squawks so jarring that they become forms of protest, a refusal to abide by any Western notion of harmony or even “correctness.” Compared to the subservient roles Fela wished women would retain, Fela urges African men to keep their individual spirit and not accept social influences of capitalism like conformity and mediation. “I be African man original,” Fela croons, one of his most succinct, powerful statements. It’s not all seriousness, though: “Fefe Naa Efe” ridiculously translates a brief observation of African women holding their breasts when they run into multiple languages, while “Igbe” (meaning “shit”) calls out backstabbing friends for being no better than the title word. The latter is a stomper, its keyboard arpeggios giving way to funkier guitar/horn interplay as Allen chugs busily before the guitar settles into a groove so lazy it’s almost Spanish.

But the highlight of this batch of reissues, and Fela’s career, is Zombie. Consolidating his side-length combination of instrumental jams and lyrical excursions into a focused, 12-minute attack, Kuti turns the title track into a perfectly ordered assault. The pidgin lyrics give the song extra power, reducing Kuti’s comments on the Nigerian military to the most basic barbs like “Zombie no go think, unless you tell them to think.” Yet the truly devastating element of the song is its perfect composition. Its rolling, funky guitar pattern is quickly bolstered by a restrained, marching Allen beat and a horn section blowing with full regalia. Over this militaristic sound, Fela lays on buzzing saxophone lines that resemble a gnat in the ear, a musical disruption that precedes the lyrical one. Yet even his outright antagonism cannot distract from how propulsive and swinging the music is (just try not to bop to the ferocious entrances of the female chorus, wielded as a collective instrument and sounding at times like a verbal precursor to modern dance music drops). With its sardonic, unsympathetic lyrics—fuck “hate the war, support the troops;” Fela hates both—and compulsively danceable backing track, “Zombie” renders the army doubly farcical, and only the West’s general prejudice against “world” music keeps it from being a perennial, global protest song. So pure is the track that it completely overshadows its B-side, “Mr. Follow Follow,” which is not only a great song in its own right but, in its come-down composition and lyrics about not blindly following any authority, a logical companion piece.

Zombie marked a culmination for Fela, not only in the individual strengths of his band composition and thematic fury but in the complementary intertwining of the two. It also became a flashpoint for Fela’s political importance, prompting the Nigerian military to raid his Kalakuta commune in Lagos, burning the place, critically injuring Fela and mortally wounding his mother. The event kicked off Fela’s most belligerent phase, in which he released some of his most volatile recordings, sparked riots at a performance in Ghana and began a run for office that succeeded only in draining the band’s coffers to the point that Africa ‘70 ended in disgruntlement over his embezzling funds for his campaign. Undeterred, Kuti regrouped with a new outfit, the more groove-oriented Egypt ‘80, for the next decade.

Only one of those works makes this set, but 1980’s “I.T.T.” is a concise demonstration of Fela’s undiminished ambition and facility with a tweaked sound. The subjects of the track’s ire are Nigerian President Olusegun Obasanjo and Moshood Abiola, then-head of the African and Middle Eastern department of the ITT Corporation, which Fela rebrands “International Thief-Thief.” Obasanjo and Abiola previously came under fire as respective representatives for colonial Christianity and Islam in 1978’s “Shuffering and Shmiling,” but here Fela attacks the men for their direct impact on the country, linking them to the old British powers who used to force Nigerians under their power to, among other things, cart around human waste. Once again Fela breaks out his reedy alto for its insect qualities, swarming over the instrumental portion like flies on the proverbial shit on which he fixates in the vocal segment.

Aspects of the instrumentation and production are a noticeable step down from the Africa ‘70 days: the horn section is mixed too loudly in front, and the rhythm is surprisingly straightforward, almost too urgent to even sway to. Nonetheless, the track is pure fire, and it’s firmly situated among the handful of bruising turn-of-the-decade releases that confirmed Fela as one of the most important artists of his time. There isn’t a weak album in this set, but Eno shrewdly builds a small narrative from the releases, not only in Fela’s musical evolution but in the consequences of his political engagement, the contradictions of his opinions and the wit of his proclamations. The throughline here is sussed out with greater nuance and depth than Alex Gibney’s recent documentary on Fela, a fitting tribute to the legacy of a man whose personal and political lives were lived entirely through his music.