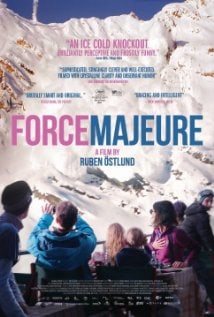 [xrr rating=4.0/5]What it means to be a man is a prescription not everyone can follow. While the idea of the Marlboro Man may be somewhat antiquated, the expectations of manliness still hew closely to the tough, gruff protector and provider, even if modernity teaches us to scoff at such an idea. Recently, Mark Kozelek (from Sun Kil Moon) initiated a one-sided feud with the band War on Drugs, claiming they could “suck his cock,” effectively emasculating the group. What’s worse than being called a “pussy” or a “faggot” for a heterosexual man? Actually being one.

Director Ruben Ostlund explores this conundrum in his acerbically funny new comedy, Force Majeure. Tomas (Johannes Bah Kuhnke) and Ebba (Lisa Loven Kongsli) are on a ski holiday with their young children in the French Alps. They are an attractive Swedish couple who are quite well off since they can afford to stay in a swank resort. The children are kept occupied with skiing and iPads. But Ostlund alerts us, through menacing shots of the mountains, that something bad is coming for the family.

Ostlund divides his film by the number of days the family is at the resort. Everything is fine on the first day, but things begin to unravel on day two. When a controlled avalanche appears to get out of control, Ebba protects the children while Tomas turns tail and runs. It happens quickly, and Ostlund doesn’t do much to draw our attention to Tomas’ reaction. It’s in the aftermath where things get really interesting.

Unable to forgive Tomas’ perceived cowardice, Ebba slowly begins to withdraw from the family. When confronted, Tomas refuses to admit that he ran away. Everything may seem okay at first, but soon enough Ebba’s resentment surfaces and she more or less tells Tomas she can never trust him again.

Ostlund wisely doesn’t confine the conflict to the family. When one of Tomas’ old friends, Mats (Kristofer Hivju) visits with a young girlfriend, Fanny (Fanni Metelius), Ebba drunkenly recounts the story of the avalanche. Mats defends his friend, claiming that one cannot truly think in a life or death situation. But when Mats and Fanny are alone, she tells him she can see him doing the same thing in a similar situation, setting off Mats. The accusation of being less than man is infectious. Tomas and Mats decide to prove otherwise by taking risks while skiing and almost brawling at the resort’s bar.

While it all sounds very serious, Ostlund creates a very funny movie. While the central conflict is truly felt by the characters, Ostlund often films their arguments at a distance, usually under the watch of a bemused passer-by. He may be pushing some very serious questions, but he does it with an astringent sense of humor, especially when Mats and Tomas go out to regain their wounded manhood.

Ostlund doesn’t want us to sympathize with these characters; that is clear enough. They are too wealthy, too couched in privilege for our full sympathy. Balance is restored at the end of the film when Ebba has a panicky moment of her own, but canceling all notions of Tomas “not being manly enough.” Most of all, Force Majeure asks us, “What would I do in such a situation?” So, what would you do?