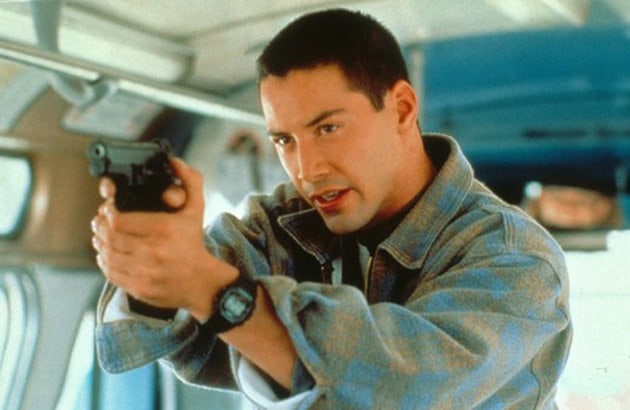 On June 17, 1994, television news cameras were fixated on the 405 freeway in Los Angeles. Live broadcasts that evening showed the LAPD chasing a white Ford Bronco. The image of O.J. Simpson on the slow lam was a prescient foreshadowing of today’s round the clock news cycle. It happened on a Friday night, when summer entertainment typically meant a new action movie. But if you were anywhere near a television that night, you couldn’t look away from the real action on the news.

On June 10, 1994, a blockbuster action movie opened that strangely anticipated next week’s news, at one point eerily resembling the real life freeway chase (and media frenzy) that would transfix a nation. Speed did everything an action movie is supposed to do, via an improbable crisis, ridiculous levels of physical danger, a tacked on romance and smart-alecky dialogue. The title drew crowds looking for sensationalism and car chases that would soon be free on the evening news. But the movie, as entertaining as it was and still is, improbably offers something deeper too. 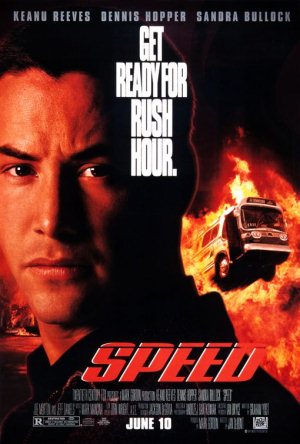 Early in Speed, SWAT team members Harry Temple (Jeff Daniels) and Jack Traven (Keanu Reeves) desperately try to free passengers trapped in an elevator shaft rigged with powerful explosives. Jack asks his partner, “Why did I take this job?” The answer is not encouraging: “Thirty more years of this and you get a tiny pension and a cheap gold watch.” This cheap token of appreciation for a lifetime of hard work inextricably links hero and villain. The gold watch is a tacky trigger for an explosive device, but it’s also a blunt symbol of the movie’s real theme. What is speed, after all, but the futile attempt to conquer time? The movie delivers incredible stunts and an almost unbearable tension, but as fast as the movie and its deadly bus moves, Speed is also about the long haul, the passage of time at the end of a life and career. The gist of the Holy Hell column, whether it’s about music or film, is what time has meant to a cultural signpost two decades later.

Speed is sometimes fondly known as Die Hard on a Bus, after the 1988 action movie that set a new standard for inventive action movies limited to a single location, or in this case, vehicle. As the film unspools, you wonder how it can maintain its tension for nearly two hours. But as if as if some demonic force (or screenwriter) is manipulating the action from afar, the movie runs through so many false endings that you may need a defibrillator to make it to the end.

That screenwriter deserves a lot of credit. Though the script is credited to Graham Yost, Yost admits that most of the dialogue for Speed was written by uncredited script doctor Joss Whedon, who revels in the action movie dialogue, especially with such a good villain. Reeves and Sandra Bullock (in a breakout role) may be the marquee names, but such movies belong to their bad guys and the late Dennis Hopper, in what may be one of his more restrained performances from this period, takes his better paid co-stars to school and owns the movie. As a bomb squad expert gone bad, Hopper’s Henry Payne wields the explosive power that hangs over the film, but by his example he also imparts the film’s wisdom.

Yes, wisdom. Payne sends his young charge on an impossible task that is in essence a metaphor for life. Like a bus rigged with a bomb that will detonate if the bus goes slower than 50 mph, you can’t slow it down. Like an unfinished freeway and subway station, there’s never enough of it. Payne is a seemingly unstoppable villain, finally done in by a red light. Somebody will pin a medal to Jack Traven’s chest to reward his bravery, sure, but the day will come when, like his nemesis, Jack will get a gold watch in return for all those years of service. Will he still be on the right side of the law?

Jan de Bont worked as a cinematographer before he directed feature films, and he put what he learned to good use – he was cinematographer on Die Hard, after all. But after directing a pair of critically and commercially successful films, Speed and Twister, but his career tanked with Speed 2: Cruise Control and never recovered.

They don’t make action movies like Speed anymore. Bullock went on to win an Oscar for The Blind Side and is one of the highest paid actresses in Hollywood. Reeves’ star has dimmed somewhat, but he returned to action movies this year, directing Man of Tai Chi and starring in the excellent John Wick – as an assassin. Twenty years later, maybe Jack Traven has gone to the dark side after all.