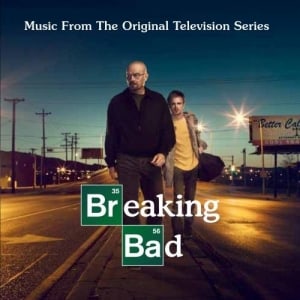 [xrr rating=3.5/5]“Breaking Bad” became a cultural phenomenon because, much like the blue product of its anti-hero Walter White, the show was crafted with precision. With some of the most dazzling and innovative cinematography to ever hit the small screen, it doesn’t take a Vince Gilligan sycophant to recognize that the series excelled in nearly every aspect, from writing to acting to music. Its infectious soundtrack blended both English and Spanish song selection with Dave Porter’s emotive and consistently impeccable score. Even from its first few seasons, “Breaking Bad” quickly became one of the most Shazam-able shows on TV, and I have it to thank for introducing me to Ana Tijoux, a French-Chilean artist whose “1977” featured in Season 3. This song led me to her brand of Spanish hip hop, which deserves a spot in anyone’s heavy rotation.

Now that the (perhaps too tidy) series finale is more than a year in the rearview, you’d think we’d have been treated to a full official soundtrack. Though two volumes of Dave Porter’s instrumental score were released in 2012 and 2013, respectively, the only soundtrack we’ve been treated to is Music from the Original Series Breaking Bad, which only covers the show’s first two seasons. Even so, this limited soundtrack provides essential listening material for the “Breaking Bad” aficionado, and it’s one that will tap into the essence of the show, if not offer a chance to hear specific favorites.

Originally released in 2010, the soundtrack recently got the manufacture-on-demand option via Amazon, offering you the chance to get a fresh, new copy instead of having to chance it that some meth head used the disc to cut some crystal. Composed of 10 proper songs and six of Dave Porter’s instrumentals, including an extended version of the show’s title theme and its end credits, the soundtrack may only scratch the surface of what “Breaking Bad” did musically, but the product is still potent.

The soundtrack’s greatest success is creating a jangly, timeless feel by featuring recent songs by modern artists who nevertheless sound entirely vintage. Former Bad Seed Mick Harvey’s “Out of Time Man,” released in 2007, is an early standout, easily conjuring up an atmosphere of decades past. The Walkmen’s “Red Moon” sounds tried-and-true as well, but with more of a sway-inducing tempo. Meanwhile, Calexico adds a rough-and-tumble instrumental with Tex-Mex flair on “Banderilla” and the Black Seeds inject some smooth afrobeat dub with “One by One.” And it’s a treat to hear Negro y Azul’s “The Ballad of Heisenberg” presented in all its mariachi glory. The soundtrack doesn’t quite reach 100% purity, though, as Twaüghthammër’s garbage rock on “Fallacies” simply feels out of place, even if the fictional group is simply fleshing an obscure reference to Jesse’s band mentioned in the series’ second episode.

We’ll have to wait and see if a more comprehensive “Breaking Bad” soundtrack will be released. The two-volume score fills in some gaps, but there are simply too many great songs from the later seasons to subsist only on this. Even so, though it represents only a small slice of the music on “Breaking Bad,” this soundtrack still manages to distill the show’s essence.