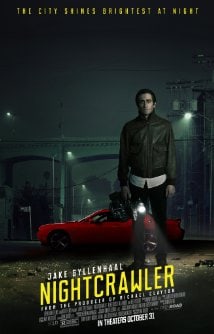 [xrr rating=2.5/5]Insomniac sociopath Lou Bloom (Jake Gyllenhaal) is the modern, ride-sharing version of Travis Bickle’s union cabbie in Taxi Driver, a freelancer chasing each paycheck too hungrily to worry, as Bickle did, about the state of the streets he cruises by night. Armed with a host of clichés cribbed from pithy entrepreneur books, Lou soon finds the perfect outlet for his self-made fantasies: joining in the rat race of privateer news videography, in which independent crews zoom around L.A. chasing police blotters to be first on the scene to shoot grisly crimes to then sell to local affiliates hungry for a gruesome exclusive.

Bickle, who was played by Robert De Niro, may not even be the best connection to the actor that Gyllenhaal conjures as Lou. With his bulging, eager eyes and impossibly toothy smile, Bloom edges far closer to De Niro’s performance as Rupert Pupkin in The King of Comedy, only with Pupkin’s showbiz aspirations inverted. Lou understands that the putzes on screen are just reciting lines; as the guy who gets the bloody footage, he’s the one who truly holds power over the flailing network where he sells his material. Gyllenhaal speaks at a speed normally reserved for screwball comedies, the sort of man who would try his best to talk a vending machine down a quarter. It’s an unmodulated, one-note performance, yet it’s remarkable for its unwavering energy and the manner in which Gyllenhaal doesn’t slowly reveal Lou’s grotesque side but rather keeps it in plain sight until people notice.

Lou initially heads to a local station to scoop a competitor but stays when he realizes how desperate they are for ratings, and as such art director Nina (Rene Russo) finds his ruthless, invasive photography a potential goldmine that overrides any ethical concerns. His lack of even a sliver of professionalism quickly transforms him from a camcorder-wielding nuisance to a fully equipped service, one that sparks equal envy and fear from seasoned nightcrawler Joe (Bill Paxton), whose attempt to bring Lou into his fold may be as much an effort to tame the reckless man as an initiative to benefit from his style. The lack of filter between Gyllenhaal’s performance and the bluntest aspects of writer/director Dan Gilroy’s script allows the Lou to smoothly transition from merely documenting crimes to outright fabrication, complete with a final act that has him risking lives for the sake of the ultimate story.

Sadly, Gilroy can’t sustain the energy to match the intensity and the warped dimensions of Gyllenhaal’s performance. The first-time director shoots L.A. in post-Drive strips of colored light slicing through amber streetlight and pure darkness, but he abandons that movie’s bravura style for perfunctory setups and dull pillow shots of L.A.’s streets and skyline. “I’m concentrating on framing,” Lou cheerfully tells Nina after surreptitiously moving a body at the scene of a crash to get a better shot, but the line could just as easily apply to the director’s functional, mildly arty compositions. Lou is a demented creation, but everyone and everything around him is terminally normal, which is Gilroy’s bid to present Lou as plausible but instead succeeds in rendering the film aesthetically inert, at once trapped in the protagonist’s headspace and afraid to truly commit to it.

Lou’s line about framing, like most others in the script, is satirical, but the laughter it provokes is the smug, knowing chuckle of those who believe themselves above all of this and smart enough to glean its points even though the film hits them with a mallet. Lou telling his homeless assistant Rick (Riz Ahmed, the only fully comic element of this dark comedy) that his job is an unpaid internship, Nina’s unsentimental call for racially inflammatory news that pegs middle-class whites as victims and poor minorities as perps, and other such exchanges are designed to get gasps and rueful laughs from an audience without implicating their own media consumption directly enough to confront anyone. The film itself cast real anchors for its TV newscaster roles, but this is less a case of them willfully being the butt of jokes than a tacit admission that they know, and do not care, that this is what they do. Aimed at prestige, Nightcrawler trades its bitterest recriminations for a vaguely troubling atmosphere and a slap on the wrist, all the better to agitate audiences to do nothing more activist than run to Twitter to rave about the movie.

The film is at its best when using the proliferation of infotainment as a back door to address the state of greedy, recession-exploiting publishers. That Lou is embroiled in competition to gather “objective” information is deliciously subversive, as are all of his TED-cribbing lectures about distinguishing oneself in this toxic market. The latter aspect of his character climaxes well before the film’s grim final act: Louis takes Nina to dinner and proceeds to coerce her into a sexual relationship, using his importance to the station’s ratings as leverage as if her body were another thing to be negotiated. To this point, Lou’s grab-bag of aphorisms and his unblinking enthusiasm have been overly ingratiating to semi-comic effect, but this scene brutally dispenses with the “annoying but harmless” aura that emanates from him, and for a moment the film ignores its social commentary to suggest a deeper critique of beta-male entitlement, an all-consuming greed that sees no difference between wants, whether they’re promotions or women, and scarcely hides such monstrosity under a front of benign pleasantry.

But soon the film falls back on its core targets of scandal-hungry press and desperate corporate climbers. This satire is sour not because of its cynicism but because it’s several decades past its sell-by date. (Who the hell honestly says “If it bleeds, it leads” anymore other than your long-tenured j-school professor?) Nightcrawler has received numerous comparisons to Network, but what the films share most strongly is the ultimate simplicity underneath their undeniable verve, a screed that demolishes the clay soldiers erected as decoys while ignoring the truly dangerous powers hidden among them. Network’s scribe, Paddy Chayefsky, at least had the Ned Beatty speech about multinationals to suggest that he could at least glimpse the almost Lovecraftian horror of our manipulated public consciousness. But Gilroy is too fixated on Lou as a cipher to realize that the man’s amoral success is the least evil aspect of the world in which he lives.