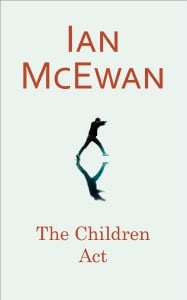 [xrr rating=4.0/5]Ian McEwan is a master of the moral conundrum. If fiction is to serve as a sort of “life simulator,” a practice run for our imaginations in different hypothetical scenarios we may meet in our real lives, then McEwan is a guide to the deepest, most perplexing nooks and crannies. His newest novel, The Children Act, is another interesting tour. Like his most well-known (Atonement) or most awarded work (Amsterdam), the characters in this new novel meet with circumstances both foreign and familiar. Even if this sort of thing may never happen to us, it’s very easy to see we’d act in the same way as any of these characters.

At the center of the novel are the trials and travails of High Court judge Fiona Maye. She’s as strong a female protagonist as anyone could ask for, drawn with humanity and self-respect by McEwan’s deft penmanship. The author knows the strength of such a protagonist must be matched with conflict capable of combating her inherent abilities to cope in order to create a powerful storyline. Fiona struggles with her husband’s admission to desiring an affair with a younger woman with equal parts passive aggression and emotional distress, at wit’s end but still firmly in control of her faculties. Still, the potentiality of this affair is but an initial set piece which comes full circle at the end of the novel in a moment of catharsis and irony.

The action foregrounded throughout the story revolves around another point of critique and interest for McEwan: faith. Though McEwan’s gone on the record as an atheist, religion hasn’t been a topic he’s tackled with as much force before as he ultimately does here. Fiona takes a case dealing with a teenaged Jehovah’s Witness who is refusing medical treatment which could save his life. The quandary before Fiona: should she act against his wishes and in his material interest (considering he is not yet a consenting adult) or bow the knee to a God, unseen and unproven, whose statutes the young man wants to honor?

Throughout the novel, questions arise regarding how much Fiona desires to save this boy from. There’s the grim, dramatic shadow of death looming over his head, certainly. On a deeper level, though, is her wrestling with the idea of whether a life can truly be well lived when centered on the service of a higher power. Her own religious beliefs (or lack thereof) notwithstanding, she becomes a symbol of all people who hope to respect people of faith while still upholding a humanist agenda. How is one to be reverent of a faith one doesn’t hold to, particularly when said faith seems to contradict basic human needs like medicine and free thought? The book offers one answer, only to serve up an even greater question by the end. But to discuss that would ruin the surprise.

McEwan’s ability to create compelling ethical confusion is an outgrowth of his mastery of characterization. Like his best work, The Children Act is yet another documentation of people plagued by problems which could beset any of us. Similarly, it’s another firm declaration in favor of the human being as the social, intellectual animal, unique in both her failings and triumphs against any other creature.

[xrr rating=2.0/5]The Kooks have known how to churn out dancey pop rock since they first a…