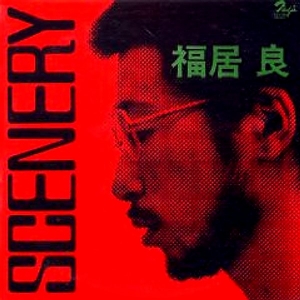 The number of hours I’ve wasted surfing through Youtube is uncountable. The site is a time sink that has drained years of my life away as I’ve clicked from recommended video to recommended video. In that time that Youtube took from me, I could have written the next great American novel, traveled the world, started a family, but all is forgiven. Because I found Ryo Fukui through Youtube. Scenery is one of those hidden gems that brings up the question: “why wasn’t this huge?” It’s a smooth jazz record in the channel of Bill Evans, with Fukui’s dexterous playing creating some of the most vibrant and pastoral music of the ‘70s.

Time and place probably had something to do with Scenery flying so low under the radar. By 1976 U.S. the era of jazz dominance in the U.S. had been replaced by Led Zeppelin, and even today few albums from Japan make a dent in the American consciousness. Still, it’s fun to talk to old-school Jazz cats who flip on the opening track “It Could Happen to You” and have them wondering “where has this been all my life?” The Fukui trio is deeply indebted to the American style of playing, covering old standards from the states with well-crafted flourishes. Satoshi Denpo’s bass playing lounges around; Fukui creates the foundation for most of these songs with his left hand carving out the rhythms and modes of the music, but Denpo adds a tranquil element to it all, a sort of lazy elegance. Yoshinori Fukui’s drum work is mostly in the background, with his kit doing workman like routines as Fukui speeds along.

Denpo and Yoshinori get one song to stretch their legs and show off their chops, and it is magnificent. Album center piece “Early Summer” is a mammoth 10 minute-plus song all built on groove. Fukui sets the scene with an electric and mesmerizing intro before his left hand lays down a thunderous beat that calls in Denpo and Yoshinori to get in on the action. The song builds excellently; as Yoshinori’s lurching hits slowly increase in vitality. There’s a fake out ending before the group bolts into a manic section with Denpo discarding his usual sereneness for rapid fire jumping all over his strings. Fukui lays down a furious solo and Yoshinori gets a full body work out before everything drops out and Yoshinori tries out his best “Moby Dick” impression.

Elsewhere the trio trots into bluesier territory with “Willow Weep for Me” and “Autumn Leaves.” These songs are showcases for Fukui’s prowess on the keys. “Autumn Leaves” holds a simple melody that sways along, but Fukui plays around it, contorting the main lines and adding brief flashes of runs or sudden shifts before landing back where he started.

The trio also excels at more somber Kind of Blue moments. “I Want to Talk About You” has some of the Trio’s DNA in the notes, it’s easy to imagine Charlie Brown moping his way through a snowy day as the song sighs. The finale holds the most emotional power of any song here. Shades of “Goodbye Porkpie Hat” float to the surface, but it’s a somber meditation all its own. This is one of the few moments where Fukui refuses the usual flair he wears so easily, instead creating a simple, yet crushing tune. It makes me wonder if it serves as a dedication or eulogy to someone the Trio knew; to add the extra pizazz would dilute the song’s power.

Re-listening to Scenery I find myself thinking of the parallel universe where the Fukui Trio became international stars, where Scenery was no well-kept secret, but a monumental triumph in jazz and Japanese music. For now it remains a deeply overlooked and underappreciated stroke of genius.