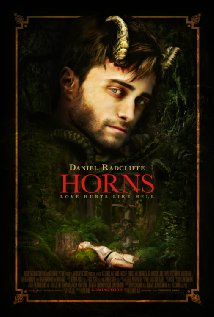 [xrr rating=2.0/5]Daniel Radcliffe will always be Harry Potter. This is not a terrible fate; he is one of the most recognizable movie stars in the world and synonymous with one of the increasingly rare latter-day fantasy icons. But, to his credit, he does not seem to be settling for that. Since the conclusion of the Harry Potter film series, his film work has veered increasingly away from family friendly fare, beginning with the resurgent Hammer Horror film The Woman in Black and continuing into a turn as a young Allen Ginsberg in Kill Your Darlings. During his years as the world’s most famous non-bearded wizard, he famously performed in a London production of the notorious Equus and recently acted opposite Jon Hamm in the black comedy BBC series “A Young Doctor’s Notebook” as an analogue of a young, heroin-addicted Mikhail Bulgakov. He seems to have a taste for dark roles.

Which, in theory, should make him perfect for Horns. The film is adapted by Keith Bunin from Joe Hill’s dark fantasy novel and directed by Alexandre Aja. In it, Radcliffe plays Ignatius “Ig” Perrish, a young man dealing with the fallout from the brutal rape and murder of his childhood sweetheart in a town where everyone believes that he is the culprit. His best friend Lee Tourneau (Max Minghella) is the public defender assigned to him. Ig’s public image is so tattered that even Tourneau has to admit that his defense is based more on legal duty than on any conviction that Ig is innocent. Ig spend most of his days drinking and attempting to fend off angry mobs and intrusive reporters. Basically, he is already in Hell.

The central conceit of Horns is that Ig wakes up one day to find the titular outgrowths sprouting from his forehead. They give him the ability to see all of the bad things the people around him have done. They also compel said people to confess the bad things they want to do to him, which the movie mines for black humor in its first half. Unfortunately, the conceit largely falls by the wayside as the story goes on. In fact, Ig’s powers grow increasingly undefined as Horns moves toward its climax. Aja seems unconcerned with whether his film should act as a black comedy, a revenge thriller, a Gothic fantasy or soft-focus love story. The director careens from genre to genre without seeming to care how this effects the feel of the movie as a whole. For stretches of time, Aja is able to make Horns an effective exercise in whatever genre he’s aping, such as in a scene where Ig convinces two homophobic police officers to admit their attraction to each other. But he follows up these moments of effectiveness with such jarring tone shifts that there’s no way for the audience to continue to feel locked in.

Joe Hill’s Horns is a remarkable book, but it has the advantage of being non-linear (thus dispensing with the frequent flashbacks the film employs) and considerably more well-fleshed out in characterization. Aja’s film, despite a two hour run time, streamlines multiple characters and deletes a lot of back story entirely, both of which tactics diminish the power of the story Hill created. It’s not just that Aja has failed to serviceably adapt the book. After all, there’s no reason why a movie should be judged entirely on the basis of its source material. It’s that he’s failed to make a coherent movie in the first place.