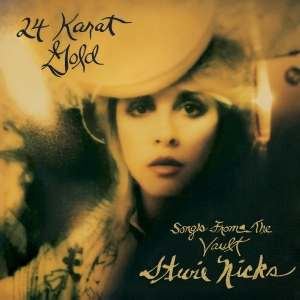 [xrr rating=3.5/5]The title of Stevie Nicks’ tenth album is as misleading as possible. 24 Karat Gold: Songs from the Vault naturally gives the impression that you will be listening to a selection of some of Nicks’ solid-gold hits. The album is actually comprised of songs written by Nicks in the ’70s and ’80s that never made it beyond demos, albeit frequently bootlegged by Nicks fans in search of lost material. But despite their origins, these are far from sub-par rejects. For the most part, 24 Karat captures time in a bottle, with Fleetwood Mac songs that never were and demos as recent as 1995. These 16 tracks may have been written over four decades, but they form a surprisingly cohesive album that never fails to capture “that Stevie Nicks thing.”

Despite being newly rerecorded in Nashville, these tracks thankfully don’t lose their period feel. Producer Dave Stewart (2011’s In Your Dreams) and a host of session musicians do their best to recreate Sound City on the Fleetwood Mac and Nicks/Buckingham demos. To complement the tracks clearly inspired by friend and frequent collaborator Tom Petty, Nicks recruited two Heartbreakers: Mike Campbell and Benmont Tench. Even amid all of the ’70s and ’80s tracks, she includes nods to current music, with the rather extraneous cover of Vanessa Carlton’s “Carousel” and country-tinged “Blue Water,” recorded with backing vocals from Lady Antebellum.

Opener “Starshine” recalls those collaborations with Petty and sets the album in motion with up-tempo rock courtesy of Campbell’s guitar. Nicks stands her ground with a resonant vocal against drums and powerful guitars. Continuing in that vein, Nicks offers up the hard-rock “Mabel Normand,” a track that tells the story of a silent film actress who died after years of cocaine abuse and addresses Nicks’ own addiction. The elaborate casino metaphor “The Dealer” keeps Nicks in the ’70s, and initially sees her proudly singing “I was the mistress of my fate.” When that confidence fades, the song looks back at failed relationships with Nicks singing “If I’d known a little more, I’d have run away.”

There are plenty of tracks like “The Dealer” that may or may not be about Lindsey Buckingham, Don Henley or Petty. But when Nicks is in retrospective mode, she is at her best when the squealing guitars are free flowing. “I Don’t Care” again features Mike Campbell on guitar, and his crunching riffs pair extremely well with Nicks’ infuriated yet blasé attitude. Lyrically, it is fairly one-note but her contradictory emotions are perfectly captured in her performance. That rippling emotion is reflected in the arrangement, as it shifts from light rock to near-metal and into subdued contemplation and back again. The standout has to be “Hard Advice,” with its story of a doomed affair with yet another musician. An homage to Petty and the advice he gave Nicks in the ’70s, the track has Nicks sharing her angst against the backdrop of blistering guitar lines.

It wouldn’t be a Stevie Nicks album without some lace-draped black magic. Her gypsy mysticism seeps through in “All the Beautiful Worlds,” originally written in 1982. The song is blatantly about succumbing to your darker side, and for Nicks, that could mean many things. But inherent in the lyrics “All the beautiful worlds that I have seen so far / Have all fallen down / It used to be yours / Calm, beautiful, childlike victim” is guilt and regret at that loss. Upping the ante is the harmony-rich “Belle Fleur” whose first lines “Mountain women / Living in the canyon / Canyon dancing / All night long” make for one of Nicks’ best ever openings. References to joining hands in a circle only encourage the mystic imagery.

As always, the star is Nicks’ signature, earthy vocal. 24 Karat Gold‘s wide variety showcases her vocal on pure rock tracks and quiet piano ballads. The more subdued “If You Were My Love” allows her drone to dominate and ease listeners into a new Nicks album. Aside from a light plucked string backing and the occasional sweeping riff, the track could almost be a cappella. The Mark Knopfler co-written “She Loves Him Still” has a guitar as her sole accompaniment and continues that theme of old love affairs. The haunting piano ballad “Lady” is an alternate version of the Nicks/Buckingham demo “Knockin’ On Doors,” but in the context of this album it reveals a side of Nicks as the aged music legend revisiting old memories, especially when she sings “The time keeps going on by, and I wonder what is to become of me.”

Whether you view 24 Karat Gold as thinly veiled copyright protection or an artist revisiting the past, Nicks has successfully taken these much sought-out demos and revitalized them. The album can’t completely avoid feeling like a collection of old songs spruced up in a three-month studio stint, but it definitely coheres. Considering how affecting most of these tracks are, it’s a wonder why they have remained in demo form for so long. Unearthing gold is a trying task for any artist, but what else would you expect from the Gold Dust Woman.