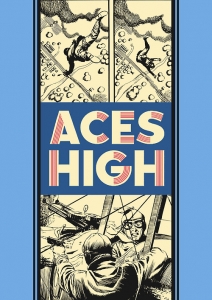 [xrr rating=4.25/5]Entertaining Comics (popularly known as “EC”), the infamous, popular 1940s and ‘50s publisher, was best-known for its horror and crime comics, but it produced plenty of other stuff. Science fiction, romance, war stories; all books that came and went as tastes changed and fashions rose and fell. George Evans was already an established cartoonist when he arrived at EC in 1953, during the period in which EC publisher William Gaines and editor Al Feldstein were at the height of their artistic and commercial success. Evans brought his clean draftsmanship and kinetic storytelling style to numerous EC books, including Crime SuspenStories, Tales from the Crypt, and Two-Fisted Tales. It was his interest in classic aviation, however, that made him stand out and he was soon regularly drawing stories for the publisher’s air war-themed Aces High, which Fantagraphics is releasing as a collection this month.

Considering the strong affinity in Evans’ work for aerial combat in general and World War I in particular, it may seem surprising that just under half of the stories in Aces High actually focus on air warfare stories. That said, though, these dozen (out of 26) tales are memorable both for Evans’s elegant linework and the near-magic of his compositions. The degree to which the artist manages to convey speed, depth and danger in a single frame of black-and-white illustration, sometimes as small as two inches on a side, is nothing short of remarkable.

The stories themselves are only slightly less compelling, though they tend to suffer both from EC’s signature breathlessness and from a certain lack of subtlety (subtlety being a commodity in short supply in 1950s comic books). Stories like “Frank Luke!”, “Guynemer!”, “Immelman!” and “McCudden!” serve as mini-biographies of the titular pilots, while other tales focus on various aspects of the still-new face of aerial warfare circa WWI: “Chivalry!”, “The Rules”, “Yellow!” and “C’est La Guerre!” all serve as pithy commentaries on war and the manner in which it is waged. “The Green Kids,” for all the unnecessary repetition of the title phrase throughout its story, is a surprisingly moving piece about the doomed youth who were routinely sent out to die at the front, and serves as a commentary on the war as a whole.

The remainder of the stories in this collection tend toward the noir/crime side of the pulp spectrum, and while they’re still entertaining, they’re perhaps a touch more familiar. There are back-stabbing dames aplenty, and of course fellas haunted by shady pasts; there are also deals gone wrong, crummy brothers and a surfeit of no-good dirty rats. Throughout, Evans’ artwork is superb, his clean style evoking dread through skillful rendering of facial expression, inventive angles and well-utilized shadows. “The Assassin” takes place almost entirely outside, in the rain, at night, and the visuals are tremendously evocative.

As always, Fantagraphics Books has done a bang-up job on this volume. It’s a little shorter than some of the other volumes in this series, with 183 pages devoted to the stories, but it’s nicely produced, with clear inks on heavy paper, and thus well worth the investment for fans. Like the other volumes in this series, the stories are reproduced in black and white, which emphasizes the line work but robs the pages of some of their original impact. Presumably, color reproduction would be prohibitively expensive. As with every book in the series, an introduction that focuses on the stories is included, as is a brief biographical essay and a summary of EC’s rise and fall.

Aces High is slightly left-of-center in terms of classic EC material. There is nary a ghoul or ghost to be found here (well, maybe a ghost or two) but there is plenty of excitement. For fans of EC or of this series, buying Aces High is a no-brainer. On the other hand, readers who have shied away from EC’s more horrific offerings might be surprised at what’s between these covers.