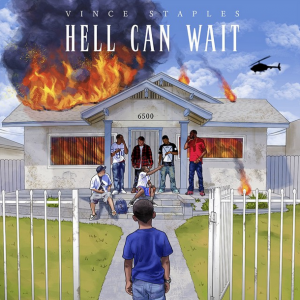 [xrr rating=4.0/5]Humans like looking for patterns and connections, even if they’re all in our heads. In the music world, this is why people found solace in Kid A and Yankee Hotel Foxtrot in the months following 9/11. Jeff Tweedy’s croon of “skyscrapers scraping together” was an eerie comfort in the aftermath, and there’s even something called “Klosterman’s Theory: Did Radiohead’s Kid A Predict 9/11?” floating around the internet. In the same way, some politically conscious music has taken on a new light in the months after Ferguson, and no record gained quite as much potency as Hell Can Wait.

Vince Staples had a hell of introduction with a guest verse on Earl Sweatshirt’s “Hive,” proclaiming, “If this was ’88 I would have signed to Ruthless.” His smooth drawl was as menacing as it was seductive, but he’s hyped up the darkness in his voice. Hell Can Wait is mainly composed of uncompromising and hard-hitting tracks, that much was obvious from the opening seconds of lead single “Blue Suede” with a synth lead that can only be called a hook in the sense of a sharp metal object meant to cause serious damage and a subwoofer-crushing bass line. Staples has a finely tuned ear for beats that make the menace in his flow drip with even more bile. “65 Hunnid” rides on a line played on piano that seems to have been dropped from a 10-story building and a brass sample that sways around drunkenly. “Hands Up” excellently uses police sirens and a high-pitched sound that’s the equivalent of a flash bang for the ears.

None of this would matter if Staples wasn’t spitting some of the harshest bars of 2014. Both the album artwork and the opening track “Fire” set the scene. Staples is observing a world of pimps, gangsters, drug related deaths and police brutality with the same beady-eyed stare. He states, “I’m probably finna go to hell any way,” with a shrug. When Staples growls, “Put your hands in the air,” he flips it from a command from a rapper to a concert-goer to a crooked cop to an unarmed teen. He knows that the rising voices ready to fight the pigs won’t last long. “Leaders risin’ lead to 25 to life in the prison/ Better watch it cause I know they got a spot for you nigga,” he snarls, but he does add his own “fuck you” to the fuzz. “Raidin’ homes without a warrant/ Shoot him first without a warning/ And they expect respect and non-violence/ I refuse the right to be silent.” The stomping single “Blue Suede” deals with poisonous decadence (“Up, I’m up now, these hoes all in love now”). Any other rapper would deliver it with an air of triumph, but Staples greets it with wide-eyed paranoia; “watch out for Judas, Vice and G Unit.”

To say Staples also has a softer side would be misleading; he still looks at the world with a cold sneer, but there’s just a hint of humanity in the closing two tracks. “Limos” is built around a swelling synth bed and a head-knocking beat. Staples relates stories of absentee fathers and unwanted pregnancies, and admonishes a young hustler “fuckin’ her raw.” “She’s starin’ in the grave while you starin’ at her ass,” he warns. Finale “Feelin’ the Love” holds a strangely beautiful background (by the EP’s hidden MVP Hagler, who produces four of the seven tracks here) and Staples actually allows his guard to fall momentarily. “2006 I said I had to get my money right/ Shit I refuse to hear my stomach growl another night” fleshes out more of his backstory. Hell Can Wait might be the “aha!” moment in Staples’ young career— he’s brilliantly creating his own mythos right in front of our eyes.