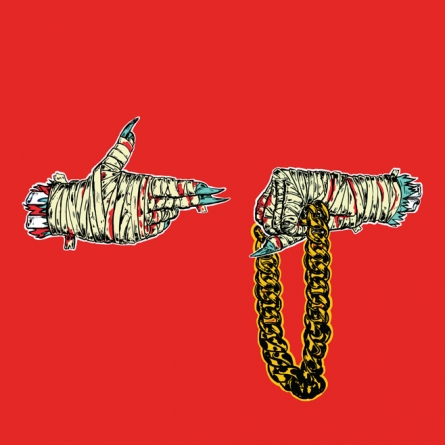 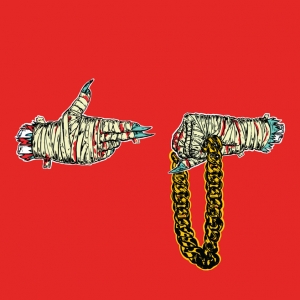 People love to categorize El-P’s production style as “cinematic,” but apparently no one told him that, in movies, sequels tend to be rehashes, mild variations of form that simply bilk another few bucks out of fans who would have been happier just revisiting the original. Run the Jewels 2 isn’t a break from last year’s surprise hit, but it pushes the El-P/Killer Mike partnership, first heard in full on the former’s production of the latter’s 2012 R.A.P. Music, to its most intuitive and mutually complementary level yet. From the moment Mike ushers in the album with a boisterous “I’m finna bang this bitch out!” yelled from what sounds like a tunnel, RTJ2 announces two independent artists at their respective peaks fully fused as one of the best duos of their time.

El-P pulls out all of the stops on the production. “Jeopardy” starts on a conveyor belt of metal hammering on metal before snake-charmer saxophone lifts it out of the factory. “Oh My Darling Don’t Cry” sounds like it bubbled to the surface of the ocean aquapolis adjacent to Drexciya’s electro wonderland, all jibbering voices and watery synths. “Love Again,” the duo’s affectionate homage to the old-school filth of the likes of 2 Live Crew, is pure sleaze, unfurling on slurred synth lines and a hook that vibrates with post-climax weakness. Even when El-P employs gentler soundscapes, he warps them into something hard. “Early” may be the most remarkable track of all, laying everything from didgeridoo-esque sounds to video game samples over a lilting indie rock core that jars violently with the terrifying document Mike gives of being led out of his home in cuffs in front of his family, who have to choose between objecting to the treatment or being threatened by cops themselves.

Mike’s forthright, first-person verses dominate the album, and he drops numerous lines of hard-won wisdom and ferocious resistance. “I’m a mixture of MJG and the Weathermen/ A revolutionary bangin’ on my adversaries/ And I love Dr. King but violence might be necessary,” he raps on “Lie, Cheat, Steal,” and on “Blockbuster Night Part 1” he barks “my fist to your face is fuckin’ Folgers.” And for someone who once thought of quitting rap to become a preacher, Mike lobs numerous grenades at organized religion, as on “Angel Duster” when he says “A pope is a fraud/ A church is a lie/ A queen is the same damn thing/ You should pray to your fake god that she die.” Killer Mike has always been socially conscious, but here his observation hits as hard and loud as his most boastful bars. The peak of his lyrical powers comes on “Crown.” an embellished reminiscence of his time spent selling cocaine where he lingers on dealing to a pregnant mother whose child developed disabilities, and finds both relief and reflection in finding that she found God and forgave him.

Compared to Mike’s political bent, El-P is often less political here than he is on his solo records. Instead, he flips the dynamic and hedges closer to Southern rap braggadocio while Mike spits East Coast documentary. El-P is nonetheless in fine form, delivering no end of potent quotables like “You can all run naked backwards through a field of dicks” and the hilarious one-upmanship of “I’ll tea bag a piranha tank.” More importantly, I can’t think of a time he had such confident flow, streamlining his ambitious patterns without sacrificing their knotty wordplay and off-the wall references (witness how casually he brings up the dentist song from Little Shop of Horrors on “Lie, Cheat, Steal”). When El-P does get political, he does so from a different angle than Mike. Instead of aping the first-person, direct observation that Mike lived, El-P expands outward, using his less harried position to stand on Mike’s shoulders to get a macro view. On “Early,” for example, he follows up Mike’s harrowing story of being arrested with a more general rant about lopsided justice. Mike, for all his fire elsewhere, suddenly turns supplicant “because [he] respec[s] the badge and gun” when cops arrive in person. Because he knows how easily he and his family can be harmed by the police, El-P rages “they’ll watch you walk to the store they’re recording/ But didn’t record cop when he shot no warning” from a safe distance. On “Crown,” El-P again contrasts Mike’s vivid memories, this time addressing a hypothetical soldier sent to war, speaking with empathy even as he notes the man being molded into a weapon.

This give-and-take between the artists—flipping their regional expectations, shading in each other’s context—arguably finds its greatest expression on “Close Your Eyes (And Count to Fuck),” perhaps the track that best shows off the album’s myriad delights. Mike is furious in his verses, leaping from prison riots to torture to an indictment of indiscriminate U.S. war policy, then later hopping over to another slam on religion and churches. El-P crystallizes his input to fully plugging the gaps in Mike’s lines, even finishing the last line of Mike’s anti-church verse. Zack De La Rocha of Rage Against the Machine drops in for one of his strongest-ever verses, trading RATM’s stridency for the same mercurial blend of hubris and honesty that defines RTJ’s chemistry, yet his most memorable contribution to the track is his clipped and looped vocal sample that provides the pounding melody. RTJ2 is engineered from the ground up to be as monstrous live as it is on headphones, and it’s on this track, where the vocals are so powerful yet most effective as another part of the crushing production, that you can best hear just how primed this 39-minute, stark machine is to bring down roofs.