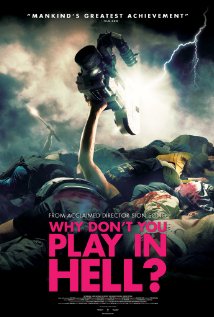 The gory, self-conscious pastiche Why Don’t You Play in Hell? opens with a toothpaste commercial. Ten-year old Michiko (Nanoka Hara) sings an annoyingly catchy jingle about the gnashing of teeth, a detail which you can be sure will come back to bite the viewer. This pearly-toothed princess comes home to a strikingly art-designed room with a floor that seems to shine in a glossy blood red. It is in fact a pool of blood, and the girl gleefully slides through this colorful discharge toward the sole survivor of the bloodbath, Jun Ikegami (Shin’ichi Tsutsumi). You see, Michiko’s father is Yakuza leader Muto (Jun Kunimura), and Ikegami and his men ambushed the Muto residence only to be massacred by Michiko’s mother Shizue (Tomochika). Ikegami escapes, his bloodied white suit catching the eye of a group of amateur 8mm filmmakers who call themselves the Fuck Bombers and eagerly film the wounded Yakuza.

Ten years later, Shizue is about to be released from prison, Michiko is an aspiring actress who runs out on a film shoot and the warring factions somehow encounter the Fuck Bombers again for blood and hijinks. Well, certainly blood.

The film’s violence isn’t the problem. Some of this bloodshed is inventive in a comically Grand Guignol way. And I completely appreciate one aspect of director Shion Sono’s aesthetic: his budding filmmakers (one of whom is clearly meant to look like Rainer Werner Fassbinder) aspire to shoot a feature on 35mm film. As much as I prefer analog projection to digital formats, this is a terribly contrived, self-conscious reference to make in such a violent movie, no matter how funny it’s supposed to be. Does the death of 35mm film resonate with a death of Japanese tradition? Sure it does! But it’s a clumsy parallel. As much as the film overflows with blood, the movie’s other major problem is that it overflows with contrived plot and incident.

Quentin Tarantino does this stuff much better. The master of the incongruous but brilliant musical cue, Tarantino scored a climactic sword fight in Kill Bill: Volume 1 with the intro to Santa Esmerelda’s disco-flamenco cover version of “Don’t Let Me Be Misunderstood.” Santa Esmerelda’s recording took flamenco and recontextualized it to a disco beat. Tarantino, the unapologetic recontextualizer, took the track out of its recontextualization, isolating the flamenco guitar – if you didn’t get the reference, you’d think he was simply using the passion of flamenco dancing to suggest the bloodletting passion of a sword fight. In his pastiche of cinematic vengeance from East and West, he deconstructed and reconstructed cinema and music in a violent bloodbath (a metaphor for editing film?) that was masterfully paced for thrills and, in his own pomo way, emotion.

Sono uses the same music cue in his film, but without such resonance. The director admits that Why Don’t You Play in Hell? bears some resemblance to Tarantino, although he first wrote the script 17 years ago, long before Kill Bill was made. Still, visual and musical cues add to the buckets of blood and self-referential humor that make this a post-Tarantino movie even if the directors are tapping the same cinematic well. Sono freely references James Bond, Sergio Leone and Stanley Kubrick, and that’s just in his musical score. The director has a reputation as being a vibrant auteur of punk cinema, and his last film was a fictionalized treatment of the Fukushima disaster. Why Don’t You Play in Hell? is reportedly the director’s attempt at a blockbuster. But if Sono has his own personal voice, the promise of commercial success seems to have washed it away in a river of blood.

Through Gopnik’s reliable and clearly organized prose, Warhol’s storied life reads like a …