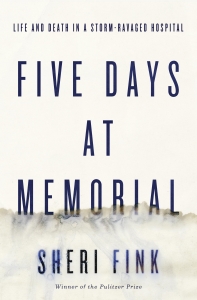 [xrr rating=3.75/5]We don’t like to talk about death in the United States. It is a part of our lives that we willfully pretend will never come. We shuttle the sick away to hospitals and care centers so they don’t figure prominently in our everyday lives. However, our doctors keep people alive as long as possible, often performing heroics to save a life. It is an interesting conundrum, and when Brittany Maynard made news this week by choosing to end her life, it opened up a national debate about a person’s right to die, making us confront the inevitable in a way we usually don’t address.

In Five Days at Memorial, Sheri Fink’s searing account of a New Orleans hospital during Hurricane Katrina, the doctors and patients had to confront this conflict through increasingly awful conditions. Stranded with the fetid water rising, they saw the generators go dead, temperatures blaze and bathrooms back up with piles of feces. Meanwhile, hospital staff needed to find a way to evacuate more than 200 patients.

Five Days at Memorial is about decisions, and the Memorial staff makes some bad ones. After deciding to save the most able patients first, the sickest remained there, and on the fifth day, some of the doctors and nurses decided to end their lives by giving them fatal injections of morphine and other drugs. Even though these patients signed DNR edicts, does this give the doctors the right to euthanize them, even in extreme conditions?
A doctor and a journalist, Dr. Fink covered Hurricane Katrina and Memorial Medical Center for The New York Times Magazine, earning a Pulitzer Prize. Her experience as a physician gives her writing an air of authority. She knows the people that populate her book, and sculpts the first half of her book like a disaster film. We get to know the doctors, nurses and patients as Dr. Fink deftly recounts in painstaking detail what happened during those five days back in 2005. In the book’s second half, Dr. Fink turns Five Days at Memorial into a legal thriller as the families of the dead seek justice for what they consider murder.

Deciding who was at fault is one of the most absorbing things about the book. Memorial, part of Dallas-based Tenet Healthcare Corporation, wasn’t properly prepared for a storm of Katrina’s magnitude, even after years of strong hurricanes and floods. More or less abandoned by the parent corporation, the Memorial staff had to find a way to contact the Coast Guard. One of the most gripping and horrific sections of the book is evacuation of the hospital’s sickly neonates. With their fragile lives hanging in the balance, the neonatologist had to manually give oxygen to the sickest babies. They all survived, but those pages are heart stopping.

In the storm’s aftermath, an investigation of the deaths focuses on Dr. Anna Pou, a physician who injected the patients left behind, including a paralyzed, yet completely cognizant man. But while the district attorney called for her arrest (along with two nurses), the shell-shocked residents of New Orleans and many health professionals rallied around Dr. Pou.

Dr. Fink presents a balanced portrayal of Dr. Pou, a doctor known for taking extra strides to keep her patients alive and comfortable. Abandoned by the government and Tenet, Dr. Pou took matters into her own hands. But did she do the right thing, or did she murder those patients? That is the central question in Five Days at Memorial. Towards the end of the book, one nurse wonders why we celebrate every milestone in life besides death. Five Days at Memorial forces us to think and talk about death, a conversation that is uncomfortable, but one we must have.