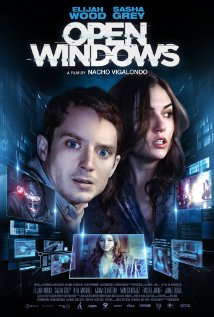 [xrr rating=3.25/5]The hacker film has come a long way since the travesty of Hackers. The presentation of technology in film is still a sticking point for many, but at least we aren’t flying through chips anymore. There’s less of a focus on making technology a mysterious realm to reveal (à la Tron and The Matrix) and more of a move to realism. Hackers don’t see into a 3D representation of the computer. They work in code. Director Nacho Vigalondo’s Open Windows is incredibly frank in that regard, advancing both the hacker film and the limits of filmmaking with its bold decision to house the entire action on a single laptop screen.

The premise itself requires the biggest suspension of disbelief in the film, for better or worse. Nick Chambers (Elijah Wood), webmaster for a fan site about actress Jill Goddard (Sasha Grey), has won an invitation to spend an evening with her. Nick is waiting to be contacted by her rep in his hotel room, and is watching a livestream of the panel discussion for her upcoming film when he receives a call from a Brit named Chord who tells him that Jill has cancelled the dinner. Understandably disappointed, Nick is unable to resist when offered access to Jill’s cellphone and a birds-eye view of a secret meeting with her agent-lover in an opposite wing of the hotel. Nick mindlessly follows Chord’s instructions deeper into the machinations of an apparent psychopath who has planned this elaborate scenario in order to abduct Jill.

For a webmaster, however dubious the site, Nick is incredibly naive. An unseen voice gives him access to the digital life of Jill Goddard and orders him to blindly follow links to ridiculously named sites like hackpot.com, and Nick does so with little resistance. The situation escalates so rapidly that there is little time left to react or weigh the appropriate responses. Nick is a pawn, and the film takes on much more depth when Nick becomes aware of that fact but continues carrying out Chord’s orders anyway. Fear is a brilliant way to control someone. Certainly in this day and age, the subject matter naturally shifts toward issues of online privacy, as the hacker becomes a very literal invader.

Vigalondo creates a tense pace on par with the best thrillers. Especially in the first half of the film, there’s barely a wasted moment in this densely layered hacker drama. Vigalondo’s biggest achievement, however, is his inventiveness. All of the action in this thriller truly takes place on one laptop screen. While that sounds quite dull, Vigalondo opens up the story within those confines by allowing Nick’s laptop access to hacked phones, security footage, Nick’s own hacked video camera and his webcam. Even Chord’s pod cameras allow for a remote visual recreation of Jill trapped in the trunk of his car. The plot extends beyond the confines of Nick’s laptop and Chord’s clandestine surveillance feeds by introducing a group of French hackers who join in the fun of hijacking Nick’s computer. The difference this time, though, is that the French trio isn’t out to manipulate Nick but believe he is Nevada, an infamous hacker known for his bold crimes. Seeing Nick’s dire situation, they assume that Chord is Nevada carrying out his ingenious plan via the unknowing Nick.

For a film restricted to a laptop screen, Vigalondo has created a thriller of sustained energy. Whether it’s the camera panning out to show several feeds at once, or zooming in to emphasize one window on Nick’s laptop, the action is fast-paced and kinetic. At the center of that action is Elijah Wood’s nervous pushover. Considering the final twist (expected but still satisfying), his performance truly grounds the film. Although the last half of the film strains believability, Open Windows is a thought-provoking effort from Vigalondo and hopefully a sign of good things to come now that he has made his way from Spanish horror to Hollywood.