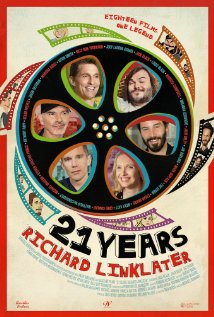 [xrr rating=1.0/5]It’s depressing to consider the increased frequency with which little movies that belong tucked away into DVD “extra features” have been labeled documentaries and given theatrical releases. 21 Years: Richard Linklater, which is only nominally a documentary, is one of the most egregious recent examples of the trend. It features very little footage of the Austin, TX, DIY/indie/cult director (and occasional Hollywood sellout) Richard Linklater, absolutely zero information on his background or influences and a heaping gob of talking heads interviews with stars and hangers-on from his movies, all of whom wax romantic about their experiences working for him. There isn’t the smallest dose of conflict in any of them. Jack Black, Ethan Hawke, Matthew McConaughey, Billy Bob Thornton and a retinue of Linklater’s lesser-known stars are allowed to simply talk, endlessly, about how much they love the man and his films.

That would have been fluffy enough, but it’s not the entire movie. To punctuate the dreariness, the talking heads have been intercut with goofy animated renditions of what the talkers are talking about. When Zac Efron, for instance, tells us how pleased his parents were at the prospect of a respectable director like Linklater casting the High School Musical star in one of his films (Me and Orson Welles), 21 Years offers up a brief cartoon in which a caricature of Efron is shoved onto a stage by his parents to audition for the role they were wild about him landing. Nearly half of the anecdotes in the movie receive this treatment. The conceit is a gimmick; in none of the animations are the anecdotes either deepened or made funnier. Directors Michael Dunaway and Tara Wood seem desperate to add some flash to a doc that they must have at least suspected was going to turn out paper thin.

It’s well-known—read the recent New Yorker profile on him—that Linklater is one of the most work-intensive directors out there. He’s a man who gets big things done on his own terms (if you consider crap like School of Rock and Bad News Bears to be tactics he employed to make the money he needed to get his incredible smaller works made). Hopefully Linklater himself can enjoy the irony that, after putting so much effort into becoming a great filmmaker on his own terms, a lazy piece of filler has been made about him, one so averse to doing the job of a documentary that it refuses to make even the most tangential consideration of how he came to be who he is.