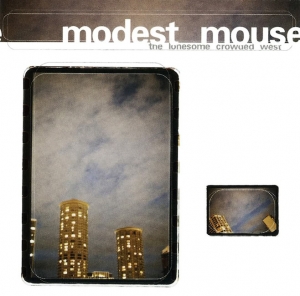 [xrr rating=3.75/5]As time progressed and Modest Mouse became more and more commercially viable, their music was sapped of the furious, frustrated energy it had been laced with in the beginning. Much of 1990s alternative rock was built on various levels of angst and individualist sensibilities: grunge artists felt miserably disconnected with popular culture, indie bands turned away from the mainstream and became a bit of an exclusionary cult and emo’s second wave was full of musicians mired in their own personal self-pity and naiveté. Modest Mouse, for their part, lurched between these emotions during their early career, and as a result, it can be hard to place them. In fact, if their most popular early album The Lonesome Crowded West exemplifies anything, it’s their inability to fit in.

The Lonesome Crowded West runs over 70 minutes long despite blistering through riff after riff. The length comes from the songs’ vulnerable passages, the toned down verses where singer Isaac Brock backs off and lets the flow of the chord progressions speak alongside his voice. This type of sonic multidimensionality had finally become fashionable by 1997 following the advent of the Pixies’ dynamic songwriting, Nirvana’s inimitable crescendos and the emotional whiplash of Sunny Day Real Estate at their peak. Modest Mouse, students of alternative rock’s greatest adventurers, waste no time developing musical tension on The Lonesome Crowded West; the rapid chaos of “Teeth Like God’s Shoeshine” sparks the record to life instantly. Similarly, the band wastes no time pulling the rug out, either, by dropping into a desperately slow tempo and melancholy harmonics just a minute and a half into the song. The tension on the record comes from slowly climbing into satisfactory emotional climaxes that never actually come, then dropping out the pace once again. Modest Mouse weren’t making gratifying music because, like all alternative musicians at the time, they didn’t feel gratified; they felt confused and bitter. The joy of satisfaction was far from their own personal experience, and so the music became withholding in its own right.

In a lot of ways the band was plagued by too many ideas. The Lonesome Crowded West was ground zero for the entire Modest Mouse discography: Good News for People Who Love Bad News‘s tuneful compositions were preempted by the folksy “Jesus Christ Was an Only Child” and the jaunty verses of “Lounge (Closing Time),” while the melodic ballads of The Moon & Antarctica stem from brighter slow songs like “Trailer Trash”; even the standard indie rock sound of We Were Dead Before the Ship Even Sank has its roots in parts of “Shit Luck” and “Styrofoam Boots/It’s All Nice on Ice, Alright.” Modest Mouse aren’t searching for a sound to explore so much as attacking everything they want at once with full force, making for quite the active listening experience where the band paradoxically gets nothing done and everything done at the same time.

People respond to The Lonesome Crowded West because it embodies every charming facet of Modest Mouse’s personality in a time when their passion was still palpable. Listening to Modest Mouse’s back catalog today, most of their records have some advantage over this one — This Is a Long Drive for Someone with Nothing to Think About is more immediately energetic, The Moon & Antarctica is more focused, Good News For People Who Love Bad News is more accessible and purely listenable — but The Lonesome Crowded West is their most restless, dissatisfied and transformative album, a frustrated, emotionally unstable wreck of music that embodied the fracturing pop culture from the sidelines. It’s a record of its time, and if it doesn’t sound quite as powerful today, that’s only because the band built on its particular emotional, stylistic and thematic successes in the following years to become one of the most respected veteran indie artists of their generation. It’s easy to characterize an artist’s most vital and creative effort as their best, and while The Lonesome Crowded West may be that record for Modest Mouse, it’s still the sound of a tragically dissatisfied band. Sure, it’s a big piece of the Modest Mouse puzzle, but it’s still just one piece.