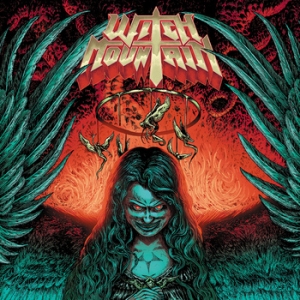 [xrr rating=3.5/5]Witch Mountain has been part of Portland, OR’s doom metal scene since their formation in 1997 and subsequent 1999 debut release, Homegrown Doom. Since then, the band has recorded sporadically, with a constantly-shifting lineup of singers and musicians. New album Mobile of Angels is their fourth full-length album, and continues to feature contributions from Rob Wrong (guitar and vocals) and Nate Carson on drums. But it marks the swan song (for now) from vocalist Uta Plotkin, who has been around since 2010’s South of Salem, but who is reportedly leaving the band (if she hasn’t already done so as of this writing). This is also the debut outing for bassist Charles Thomas, who is the band’s seventh bass player. Everybody keeping up?

Given all this shifting of band members, it’s astonishing that Witch Mountain have any cohesion or chemistry at all, but the fact is that Mobile of Angels is a solid album, not groundbreaking perhaps, but enjoyably heavy and crunchy throughout, with enough variation to keep the eyes from gazing over. Uta’s voice isn’t the strongest, but her gutsy alto stands up against the distortion onslaught, and her lyrics carry some interest beyond the usual doomier-than-thou material of many similarly-inclined bands.

Album opener “Psycho Animundi” opens the proceedings with an expectedly down-tempo, grinding rhythm, but is livened up both by Uta’s voice and a smattering of quieter interludes. It’s a competent start if not a particularly striking one. Follow-up tune “Can’t Settle” is considerably more groove, with slabs of withering riffage playing in counterpoint to the Grace Slick-ish vocals. New-guy bassist Thomas doesn’t do a whole lot here besides hold down the bottom end, but he’s capable at his job, alongside drummer Carson, the rhythms are unexpectedly playful, but watertight nonetheless, which lets the guitarist and singer fly off into their respective ethers.

With only five songs on the album, you’d expect these tracks to be fairly epic, and so they are, with four tracks clocking in at over seven minutes, and the ten-and-a-half minute “Your Corrupt Ways (Sour the Hymn)” serving as the midpoint tent pole to the entire album. These extended workouts allow the band plenty of time to throw in different sections, including spoken-word bits, crushing rhythmic interludes, shifts in tempo and dynamics, and squalling guitar leads. For the most part, it all gels, although there are times when the band seems to be taking a left turn simply because it doesn’t know what to do next. Happily, these moments are few.

The album closes with its gentlest and perhaps most melodic tune, “The Shape Truth Takes,” a song that’s unexpectedly lovely, with Plotkins’s harmony vocals soaring over waves of guitar and percussion. It’s a sweet way to close out the record—“sweet” not being a word often associated with doom metal—and adds a melancholy note, given that this is singer Plotkin’s final contribution to the band’s discography. But if Witch Mountain has taught is anything over the years, it’s that they always come back, reconfigured and rebooted, to rock once again. Let’s hope they do so one more time… at least.