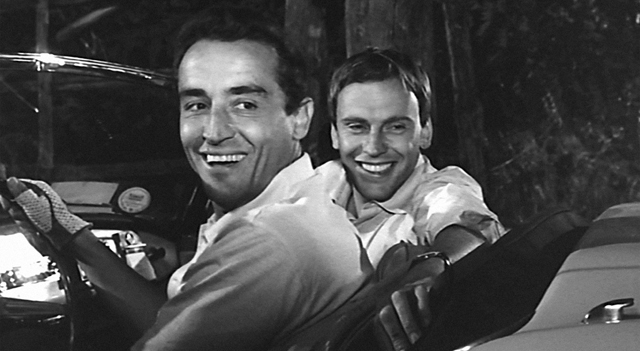 While Michelangelo Antonioni with his glowering gaze and Federico Fellini and his grotesqueries may dominate the Italian cinema of the early ‘60s, other auteurs helped fuel this epoch that is now considered one of the best in the country’s cinematic history. One nearly forgotten gem, Dino Risi’s Il sorpasso (1962), rejects the highbrow trappings of Antonioni, Fellini and Visconti, and melds together the best elements of comedy and tragedy, making it more fun to watch than many of the other masterpieces to spring from Italy at the time.

Essentially the story of two mismatched men in the early days of a burgeoning friendship, Il sorpasso deftly skips from light, airy scenes of screwball madness to heavy drama without feeling forced or contrived. Starring Vittorio Gassman as Bruno, a fast-living, impetuous womanizer, and Jean-Louis Trintignant as Roberto, his younger, straitlaced and reluctant counterpart, Il sorpasso is a character study of two very different men who just made need the other to find balance. Bruno is flashy, always borrowing money he can’t pay back and getting into trouble, while Roberto is studious and timid, afraid of women. Roped into a road trip with the older man, Roberto vainly attempts to extricate himself from Bruno’s charismatic web for the duration of the film, but soon realizes he may actually envy his friend’s extroverted lunacy.

Looking somewhat like Jean Dujardin, Gassman plays his Bruno as a blur of motion. He looks like a leading man, but acts like an ass, constantly trying to pass other cars at breakneck speeds (the film gets its title from the act of overtaking another driver) and hitting on everything that moves. Despite his peccadillos, it is impossible not to like Bruno. Meanwhile, Trintignant turns in an excellent performance as the stunted Roberto. As an audience, we’re meant to identify with Roberto, and Risi even allows us into his thoughts via a few voiceovers. Despite desiring Bruno’s freewheeling attitude, Roberto tries again and again to keep his friend out of trouble, but to little avail. 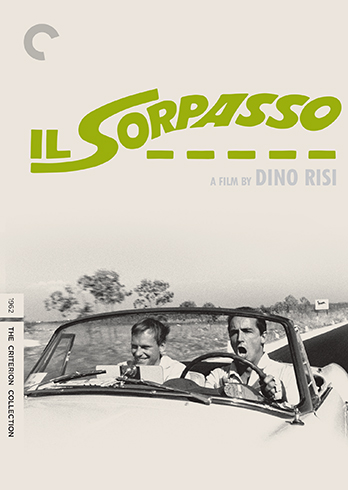 Risi wisely prevents Il sorpasso from settling into a one-note journey where Bruno’s asinine ways finally corrupt Roberto. Instead, he draws these characters with a deeper palette. Roberto enjoys the newfound freedom he feels with Bruno, while Bruno proves that for all his bumbling, he is actually a lovable loser who means no harm beyond experiencing life to its fullest, even if that means a little bit of peril every now and then.

Filmed in gorgeous black and white by cinematographer Alfio Contini, Il sorpasso is a sumptuous Italian visual feast as the men travel from the deserted streets of Rome to the countryside to the coast. Much of the film takes place in Bruno’s little convertible car as the men whip past other drivers at ungodly speeds, including a hair-raising final scene along a narrow, coastal highway.

Though considered a commedia all’italiana, Il sorpasso is a surprisingly sober and sage look at two very different men who join together for a short period of time. Though neither is the perfect man, Risi asks us to accept them, despite their shortcomings. Gassman and Trintignant make it easy to love and feel heartbroken by Il sorpasso and it’s time for the film to earn the recognition that has eluded it for so many decades.