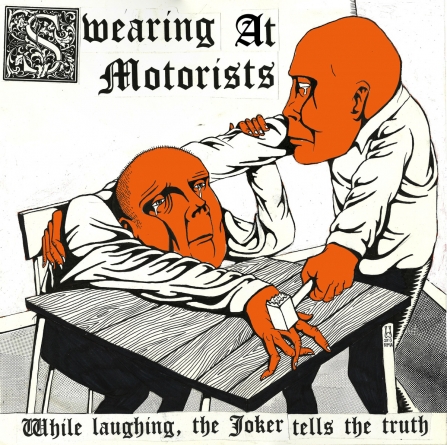 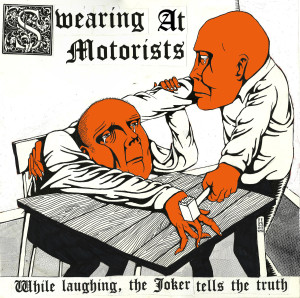 Like fellow Ohioans Guided By Voices, Dayton’s Swearing at Motorists tend to favor brevity, crafting often-loose approximations of songs that barely stretch across the two-minute mark. Where the former ostensibly places greater focus on crafting a quality hook, Swearing At Motorists seem less concerned with song craft and more interested in cultivating a very specific mood: one of depressive malaise that comes only from the insufferable winters and oppressive summers of the Midwest, wherein the only solace is often found in the bottom of a glass.

It’s little surprise, then, that a number of songs within the Swearing at Motorists catalog deal directly with the consumption of alcohol and, occasionally, more elicit substances; anything to numb the pain and stave off boredom. While Laughing, the Joker Tells the Truth largely follows this same thematic template, swinging loosely between more ramshackle folk numbers and charging barroom rock ‘n’ roll.
Guitarist/vocalist Dave Doughman makes the most of his somewhat limited range, layering both his vocals and guitars to create the illusion of something greater than the sum of the duo’s parts (Joseph Siwinski handles the minimalist drum kit), often employing subtle tonal shifts in his voice to create the illusion of a second or third singing partner, which results in a series of atypical harmony duets with himself.

These production tricks can often be compelling on the surface. But in order for there to be any lasting impact there needs to be something more in the songs themselves. There must be a certain level of substance, either in the material or the arrangements, that helps them stand on their own and not rely solely on layered distractions to draw attention away from the lack of a fully-formed song underneath.

Where GBV operated at a rate so prolific that half-formed ideas could be chalked up to an inability to properly self-edit, Swearing at Motorists have had nearly eight years in between releases and, despite the time, still manage to fill While Laughing, the Joker Tells the Truth with half-finished ideas and sketches of songs. “17th Last Cigarette (Thinkin’ Bout Drinkin’)” is nearly two and a half minutes of an exhaustive recitation of the parenthetical portion of the title. By song’s end, the listener barely has the energy to keep their head up to continue with the remainder of the album. On “Famous Orange Sweatshirt”, the phrase “we were running” is repeated ten times, taking up nearly half of the song’s running time, and ultimately going nowhere.

All of this would be excusable if the repetition in the lyrics lent themselves to the songs’ forward momentum, driving them to greater heights as the music surged and swelled around them. But this simply isn’t the case, with the music often as repetitive as the lyrics, relying on only a handful of chord changes throughout.

Given the subject matter and general mood, however, this approach should come as little surprise. On the aforementioned “17th Last Cigarette”, Doughman tells us he was “thinking about drinking/ But I [didn’t] have the energy”. With this somewhat tossed-off statement, Swearing at Motorists’ entire ethos is laid bare: not only do they sing about a very particular form of Midwestern ennui, they’ve essentially adopted it as a lifestyle philosophy that has permeated their art. This creates a level of disinterest that transcends any sort of fictional lyrical accounts and has manifested in both the songs’ construction and presentation (“I only want to feel nothing”, Doughman sighs on “The Darkest September” against a plodding two-chord piano figure).

When greater focus is placed on a song’s construction, Swearing at Motorists tend to come out swinging. “Friend of Mine” relies largely on a single guitar and Siwinski’s driving kit work, forging straight-ahead blue collar indie rock, for which the Midwest has largely become known. Stripped to its basest elements, Swearing at Motorists becomes a lean, well-oiled outfit capable of producing compelling rock that transcends the filler present on the majority of the album, making one wish for either a greater focus on the writing or a stricter editing process that would have helped whittle the album down to a tight EP.

“Great Actress,” with its loud/soft dynamic shifts and fully-formed arrangement, proves to be one of the better tracks here, the pair again powering through and operating proficiently in a stripped-down guitar, drums and vocals template. At nearly three minutes, it’s one of the longest songs on the album, clearly benefiting from the additional time afforded and allowed to develop into a memorable track replete with fairly a sizable hook that toes the line of power pop before kicking things up a notch with its explosive outro.

But unfortunately these moments are too few and far between to make While Laughing, the Joker Tells the Truth anything more than a tepid reentry after nearly a decade away. Without the structural support of stronger surface material to aid in the heavy lifting, the multiple overdubs eventually threaten to collapse the weaker tracks in on themselves, victims of their own poor construction and lack of attention to compositional detail. When stripped to their essentials and utilizing stronger material, however, Swearing at Motorists are at their best.