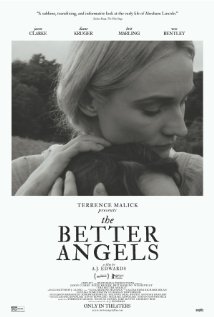 [xrr rating=2.25/5]It seems to be especially fashionable as of late to compare films to Terrence Malick films. Amy Seimetz’ Sun Don’t Shine, got the treatment, which would be inexplicable if not for the surface similarity, a story of lovers-on-the-lam, with Malick’s debut Badlands. Shane Carruth’s Upstream Color was compared just as unreasonably to Malick’s The Tree of Life, perhaps because both were beautiful, full of music, and assembled largely in the editing room. A bit more fittingly was David Lowery’s Ain’t Them Bodies Saints, which uses images of beauty to create an idyll somewhat similar to those that define Malick’s films, although Lowery’s film was far more interested in folk legend and myth, elements that Malick puts on the backburner, if not away from the stove altogether, in Badlands and The New World.

Add to that list The Better Angels, the directorial debut of A.J. Edwards, who appears in the credits of Malick films dating back to The New World, most prominently as an editor on To the Wonder. To be sure, Edwards’ film is a pretty close imitation—closer, at least, than the aforementioned—both in style and story, but that relative closeness comes with the loss of anything individualistic about Edwards and his film.

The Better Angels, which takes its title from which takes its name from the end of Abraham Lincoln’s first inaugural address, looks at a sliver of the childhood of the great president (Braydon Denney), although it could be pretty much anyone else, too. Although much of what is in the film has historical backing, it is an indistinct story of a gentle, quiet boy (he has very little dialogue) raised by his graceful, kind mother (Brit Marling) and his strict, gruff father (Jason Clarke), as well as his father’s second wife (Diane Kruger) after the first succumbs to illness. The dynamic here is very close to The Tree of Life, with the father eventually coming to embrace the son’s timid, thoughtful nature and the son coming to understand his father. Also like The Tree of Life, the story is presented as a memory, this time conjured from a distance by Dennis Hanks (Cameron Mitchell Williams) voiceover, a cousin of Honest Abe’s mother and a close friend of the great president, which is taken verbatim from an interview. There is thus a distance in the narrative aided by the black-and-white cinematography that seems more like Malick’s first two films than his later four, although The Better Angels’ narration has a more direct, concrete relationship to the images and story. At the same time, the quotes Edwards uses are not overly specific—they don’t mention Abe by name or contain references to the future, for one—and they help give the film a far more universal than one would expect of an ostensible biopic. In fact, there is nary (if at all) a mention of Abe’s name in the film and only one reference to slavery in the entire film, a shot in which Abe sees a group of chained men walking through a forest. It’s telling that this is the most out of place scene in the entire film. It gives it a strange and strained specificity that is at odds with what is generally a look at childhood. Even period detail is muted or without emphasis for most of the film, at least until we begin to see glimpses of Abe at school, where we get a nice shot of the American flag with 15 stars.

The camera, meanwhile, is constantly roving, looking at trees and grass, capturing natural light, and, as is so common in Malick’s films since The Thin Red Line, turning its gaze upward to the sky and sun. As imitation, it is impressive; as a unique meaning-making device, however, it is lacking. In a Malick film, nature footage and landscape comment indirectly on a character’s state-of-mind. Trees, grass, sunlight beaming through the leaves, and running water suggest a natural Paradise which the protagonists inhabit for only so long and then attempt to reclaim. In The Better Angels, nature is less a suggestive landscape than a setting, not evocative of anything in particular. Edwards seems to be aping technique without accounting for function. The childhood he depicts is a series of events presented poetically without clear purpose.