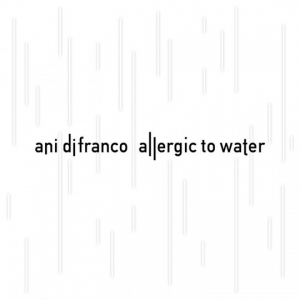 [xrr rating=3.5/5]At this stage in her career, Ani DiFranco is difficult to write about critically. Not just a legacy artist, she’s a veritable institution, cult royalty in the independent music realm. As such, separating her music from her figurehead status is problematic, and maybe even futile due to the personal nature of her work. Additionally, when a songwriter’s albums number in the double digits, the risk of repetition increases. Across the 17 studio records before her newest installment, Allergic to Water, DiFranco experimented and pushed her boundaries in virtually every fashion, both in her musical approach and lyrical concerns. Remarkably, Allergic to Water finds her mostly avoiding redundancy, and even regaining some freshness that was lacking on her most recent few albums.

Largely absent are the polemical numbers, which is a positive. Her political tracks on 2012’s ¿Which Side Are You On? often felt forced, undeveloped, token and, at times, contradictory in their sentiments. On her latest, when the subject matters do veer into the political realm, they offer general social commentary from an astute observer, rather than a bitter screed with a specific target. Allergic to Water’s focus, rather, is on simple joys and compassion. Throughout nearly all 12 tracks, DiFranco feels relaxed and contented. Even breakup songs “Careless Words” and “Harder Than It Needs To Be” feature assured narrators accepting of their circumstances; the latter even has some coy humor, with her sardonic wit carried by a sousaphone’s oompah. Likewise, there’s no shortage of love songs (“See See See See” and “Yeah Yr Right”) that, thanks to their playfulness, aren’t cloying despite how heartfelt they are. The finest among them, “Tr’w,” is intriguing for the sexy, sweaty vibe of its standard blues configuration. It’s tempting to credit DiFranco’s turn toward domesticity, marriage and motherhood with this shift. Her New Orleans home also bears a marked influence on the record; not in the sense of featuring big brass bands or zydeco, but in its mossy, humid ambience.

Since her sonic experimentation is mostly reined in, DiFranco’s inimitable guitar playing is back at the forefront. Whether strumming, plucking, or finger-picking, playing a slow number or going frenetic, her style is as unmistakable as Johnny Cash’s voice. Still, there is room for a variety of supporting sounds. Opener “Dithering” has a sensual groove in its rhythm, flowing forward and backward with handclap percussion and a foot-stomping feel. DiFranco’s more delicate vocal approach underscores the lyrics’ gravitas. Elsewhere, “Woe Be Gone” showcases her deft poetic talents — the title play on words inverts its original meaning — and ability to craft a complex but infectious melody. “Still there’s swiftly shifting sands beneath our feet/ And an unexplored hemisphere lying underneath,” DiFranco sings in the chorus, championing both optimism and seeing wonder in mystery.

Wisely chosen as the song from which the album gets its name, “Allergic to Water” is the record’s centerpiece and is representative of the overall mood. It’s a moving call for understanding delivered in a narrative of a person who is literally allergic to water and at odds with the most basic essence of life. DiFranco’s supple pipes and imagery presents a protagonist with an innately miserable existence who strives on in the face of it. The key stanza is poignant, If you stretch your mind all the way as far as it goes/ There’s someone out there/ Who lives further than that/ In a place you can never know.” Her plaintive acoustic plucking is largely unaccompanied at first, but more instruments gradually enter, most notably the stark piano notes and a military drum pattern in the background. The second most stand-out tune, “Happy All the Time,” evokes some ambivalence. It’s an unapologetic statement about not being tortured. DiFranco makes a compelling case in her hammock-swaying cadence and does her best to make the sentiment engaging. At the end of the day, though, how interesting can it be to proclaim how happy you are? Still, the sleepy melody and chorus linger in the memory, due to the light organ twinkling and backing vocal “doo doo doo doos.”

While Allergic to Water is DiFranco’s best in years, it is not exempt from misfires. The ominous “Still My Heart” features an affected vocal delivery and buzzing violin, yet amounts to filler. “Genie” has a Middle Eastern-tinge in its percussion and sitar-like notes, but ends up plodding rather than mesmerizing. Fortunately, the album wraps on a high mark with closer “Rainy Parade.” A lullaby of sorts with shuffling drums and a triangle ringing, it is an ode to fostering positive perspectives when pessimism is more tempting. Even the cliché of making lemonade out of lemons sounds novel in the song’s context. “Who says it’s better to be dry?/ The mighty oak trees are so happy right now they could cry,” DiFranco sings. It’s an apt thematic end for a record defined by taking personal hopefulness and giving universal application.