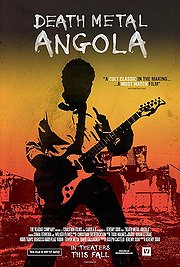 [xrr rating=3.0/5]The corpse of a beloved family member rots away before your eyes. This is the kind of morbidly fantastic imagery that would be right at home in a death metal song. But for the residents of Huambo, a city left in ruins during the long Angolan Civil War, it’s a way of life. The documentary Death Metal Angola connects a dark music usually associated with misunderstood teenagers with the harrowing trials of a national nightmare. It’s a great subject for a movie, but this one doesn’t always do it justice.

The film is beautifully shot in natural light. Interiors frequently leave subjects with their faces in shadow, which creates visual atmosphere and suggests the inner lives of the people being filmed. A singer’s face is in shadow as he pounds out barre chords on an acoustic guitar and sings about personal turmoil in a voice that’s part Satan, part Cookie Monster. A woman running an orphanage in Huambo also has her face obscured by shadow when she listens to a nine-year old boy talk about the death of his father and his abusive stepmother who refuses to let him stepson contact family in another city.

Death Metal Angola is the story of Angolan orphans, but the title draws you to something else, the story of Angola’s first rock festival. There is a gentle poetry in shots of the fading hand-painted murals on the grounds of the Huambo orphanage, and a sidebar notes that the young artist who created the murals has died. Footage of young musicians include the gently charismatic Wilker Flores, whose guitar music frames the film. Each subject is inherently interesting, but director Jeremy Xido doesn’t find the right balance in these competing threads. Angola is a faraway land torn apart by decades of strife, but the subject is still a rock festival, a place where girls come to invite rock stars to their homes. Still, when the festival runs into problems, the drama of a troubled rock festival pales next to the drama of a war-torn land filled with memories of bombs and bodies.

Some of the most entertaining scenes in the film come near the end in news footage of the next year’s Angolan rock festival in Huambo, which comes off like a condensed descendant of Heavy Metal Parking Lot. If documentaries were rated on subject matter, Death Metal Angola would be an easy five stars. There are moments where it comes together, as in the end credits sequence showing Huambo orphans playing air guitar. But the movie doesn’t have a consistent voice, veering between Angola’s scarred poetry and the pedestrian conventions of the music documentary. Xido tells his impressionistic story better than he tells the story of the music festival. This is one of those documentaries where the footage for a great film is clearly there, but the material isn’t shaped into something that truly makes it sing.