February 25, 2021
Home Music A Winged Victory for the Sullen: Atomos 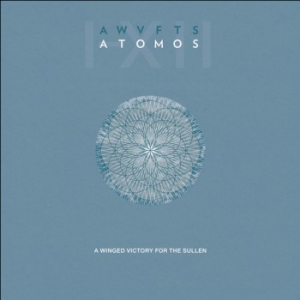 [xrr rating=3.75/5]A Winged Victory for the Sullen’s very name encompasses their sound. There’s a majesty that hovers around the notes, victorious at times, but always with a lingering hint of melancholy, like the moments after a fierce battle. But it’s the “Winged” part that does their sound so much justice. This is music that glides, stretches and soars through the air. Atomos is Greek for invisible, and, in that sense, it does feel like we’re getting glimpses into another world that’s usually rests unseen.
Atomos was released on Erased Tapes in the U.K. and Kranky in the states; both record labels hold some of AWVFTS’s finest peers in the genres of ambient and neo-classical: Tim Hecker, Nils Frahm and Adam Wiltzie’s old group Stars of the Lid. Despite the strength of their label mates, the duo doesn’t seem to look to them for influence. There’s no manic piano experimentations like in Frahm’s work, and, though Atomos does work in claustrophobic spaces, it doesn’t create the same cacophonous insanity of Hecker’s Virgins. Instead, Atomos looks inward, proving the space between piano lullabies and terrifying static.

Atomos, at its most visceral, works on sheets of sound. “V” shimmers and reverberates in oddly mesmerizing ways before a single string note pierces the veil. In similar fashion, “I” emerges from a cloak of shining static and builds to a swirling string section that’s as brooding as it is beautiful. It’s as though Atomos is the soundtrack to another planet’s version of the Discovery channel documentary Planet Earth, though it’s a much colder planet than ours.

There’s anxiety here that separates Atomos from simple ambient spa noise. “VIII” doesn’t burst out of the gate, but lets a disorienting an organ line dominate the front half of the song. The organ’s notes seem to come in and out of focus, making the entire song feel like it’s on the verge of collapse. The ping-ponging opening notes of “X” sound like the attacks of a Godspeed You! Black Emperor song. Those notes seem as large as skyscrapers, crafting and controlling the song even when they fade into the background. AWVFTS can also make beauty without fear. “III” holds a piano that skates around gloriously; as it shifts from chord to chord, a string section ripples in its wake. “XI” lets the low end do most of the work, with a plucked bass sauntering its way through the track before a hypnotizing piano riff rises to the forefront of the song.

Atomos holds only one weakness. Despite the beauty and tension on this record, there are only few tracks that truly stick afterwards. These songs, too often, feel so ephemeral that they can’t penetrate the mind. But it can work to the album’s advantage. This is a record to be enjoyed in one sitting, with each song fading into the next. It’s a cohesive and free flowing album that feels stronger than the sum of its parts.