[xrr rating=5.0/5]Pop canonization is a dicey prospect. One the one hand, it is validation of a group’s achievement and a recognition that renders initial dismissals obsolete with respectful acknowledgment. But just as often, it strips artists of the confrontational edge that inspired debate in the first place. Led Zeppelin have been dinosaurs for so long now that it can be hard to remember that they got to arenas in the first place by being the hardest rocking, good-time-having-est band of their era. Looking at the receipts for these two reissued albums, each selling somewhere in the officially certified range of “a cubic fuck-ton,” fails to adequately contend with the fact that Zep’s untitled fourth album and Houses of the Holy are two of the most leftfield albums a superstar band could ever release.

Take “Four Sticks” off of IV and “Dy’er Mak’er” from Houses, for example. While the latter gets surprising radio play as the designated “odd Led Zeppelin song,” both illustrate how confidently the band had arrived at their hybrid sound after using Led Zeppelin III to introduce dynamic wrinkles into the blues behemoths and sex rock of the first two LPs. The former nurtures a vague Middle Eastern/Indian motif that would blossom most fully on “Kashmir” several years later, and if the song derives its title from John Bonham playing with four drumsticks, it’s remarkable that the wildman turns in one of his most elegant performances, layering and contrasting the sound rather than simply doubling it. “Dy’er Mak’er,” not even the strangest song on its album, nonetheless taps into the reggae and dub craze then taking root in the UK, spacing out each instrument so that the conflicting gaits turn into blissed-out exploration, with Bonham’s collapsing drum pattern and John Paul Jones’s flat-lining bass trudging ever forward.

And that’s not all. IV kicks off with “Black Dog,” a loping number which always sounds like the band is overshooting their tempo, then pulling back too much, then overcompensating again. The stop-start riff and constant speed change creates such a roller-coaster effect that the stomach-churning quality of the song has yet to be diluted by 40+ years of heavy rotation. Houses springs still more surprises with the unexpectedly credible funk of “The Crunge,” previously heard in interpolations during massive live jams of “Whole Lotta Love,” and “Dancing Days,” the kind of song that druids made have made if Stonehenge had been a giant circle of Marshall amps. Then there’s whatever “No Quarter” is: with its artificially slowed tempo reducing an already spare song to percolating sludge, the track reconfigures the band’s pagan folk leanings around post-psychedelic fallout. It’s a “Twilight Zone” radio play in which a hippie drops acid to escape his uncertain and violent times, only to find himself dropped into a hamlet preparing to fight to the last child to stop the invading Vikings. 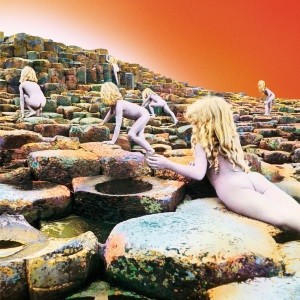 For the most part both albums stand out as the arguable highlights of Zeppelin’s discography for perfecting the various sounds the band tested with their previous records. IV infamously came out unlabeled and untitled as a middle-finger to those who attributed Zeppelin’s success to nothing more than name-recognition and bandwagon-jumping, but equally amusing is the idea that any randomly selected 10 seconds of music from it wouldn’t be instantly identifiable as the group. “The Battle of Evermore” and “Going to California” deliver on the promise of III’s folk experimentation, while “Misty Mountain Hop” feeds it back into hard rock. “Rock and Roll” tips its hat to self-congratulatory fist-pumping even as its incessant drive—Bonham’s drums impatiently surging forward when all the other instruments drop out, actively competing with the end of Robert Plant’s chorus—retains the jubilance of four young men having the time of their lives. On Houses, “The Rain Song” proves that the band could do achingly lovely as well as heavy blues or medieval wistfulness, and perhaps no other rock ballad was as sweet yet technically complex until Prince unleashed “Purple Rain” a decade later.

Elsewhere, “Over the Hills and Far Away” consolidates the sweeping soft-loud structures of the first album’s gargantuan blues into a perfectly digestible lilt ‘n stomp, and the fact that this exceptionally pleasing single was Zeppelin’s first to not break the Top 50 is proof that even when this band was the most popular in the world, the average Joe could still find ways to insufficiently appreciate them. And if you’re in the mood for the full effect of Zep’s early blues epics, IV’s “When the Levee Breaks” perfects them, a nightmare of a song with blues bars shoved into jet-engine decibels and the specific, political horror of the 1929 original amplified into apocalyptic frenzy. Zeppelin’s relationship to metal has always been tenuous, rejected by the band members themselves, but they never sounded as metal as they do here, with Bonham’s fills in particular sounding like he played toms with anvils dropped from great heights.

The perfection of these tracks is matched by their meticulous assembly, and once again the bonus tracks on these reissues, all of them alternate takes or mixes, illustrate that what made the album was not arrived at through spontaneity but a carefully orchestrated sonic unity. Nowhere is that exacting musical and engineering creation more apparent than in the albatross of Zeppelin’s catalogue. For those of us who grew up with “Stairway to Heaven” as the oppressively ubiquitous radio staple, long ago stripped of its mystique through sheer overplay, it can be a challenge to identify just what led to its enshrinement. But set aside any attempt to “solve” the song and its enduring charm wins out: has an eight-minute track divided into several distinct musical sections ever sounded so brief or so hook-filled? It’s an anthem without a clear subject, not a call to action or a celebration of anything, and as such it has aged better than youthful rants from bands that do indeed grow old (“My Generation,” “God Save the Queen”) or insipid, feel-good romps (“We Will Rock You”). It succeeds on its constant escalation, and this new remaster emphasizes how much ground is slowly covered with its opened-up space and heavier bottom end, teasing out the ephemera of its acoustic passages and the all-out metal stomp of its climax. It is all of the best aspects of both albums, maybe of the band itself, in one fluid suite, and perhaps the most surprising thing about it is that it can still surprise.