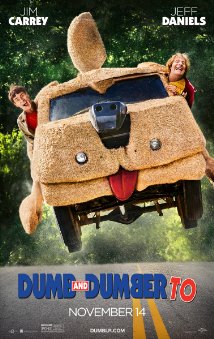 [xrr rating=1.25/5]Towards the end of my Dumb and Dumber To screening, someone in my row began to snore. It was a guttural sound, building slowly to a crescendo before blowing out and then repeating. The back row is reserved for critics and they aren’t the type to commit such peccadilloes in the cinema. No, it wasn’t the guy who sneaked into the row after the lights went out. Rather, it was the dog he smuggled in with him, tired of the antics of Jim Carrey and Jeff Daniels. If the pair, returning to Dumb and Dumber after 20 years, can’t hold a dog’s attention, how well does that bode for the film’s effect on a slightly more intelligent audience?

Notice, I say slightly, because it would likely take someone with a low level of intelligence to truly enjoy this raggedy sequel. The first Dumb and Dumber worked because there was some astuteness operating behind the silly antics. That, and the appealing, almost loveable Lloyd Christmas and Harry Dunne (Carrey and Daniels, respectively) helped the first film rise to the top of ‘90s gross-out comedies. But Dumb and Dumber To and Bobby and Peter Farrelly saddle its cast with lines such as “it’s all water under the fridge” and “genital donor match.” That’s a long cry from sly zingers like “the salmon of Capistrano.”

There is also an inherent meanness at play here that didn’t exist in the first film. Lloyd is willing to sell out Harry at any opportunity. The film begins in a rest home where Harry is visiting a catatonic Lloyd. The punchline comes soon: Lloyd has been faking for 20 years to dupe Harry. Harry rewards him by pulling out his catheter, with the help of two gardeners. Then the opening credits roll.

You know there is a problem when six people earn writing credit. There is a semblance of a plot here. Harry and Lloyd set off on a road trip to find Harry’s long-lost daughter. Along the way they meet Kathleen Turner, retread some of the gags from the first film and make a mess of everything in their path. I admit, I laughed a few times during this film, but I am still not entirely sure if I was laughing with the film or laughing at it.

So who is the audience for Dumb and Dumber To? The gross-out comedy is alive and well with 21 Jump Street and Neighbors. Something is off here. The pacing, the jokes, I can’t entirely put my finger on it. It is great to see Carrey and Daniels together again, but both of the stars, now in their 50s, seem to be going through the motions. Anything for a paycheck, eh? It always a bad sign when studios don’t release advance reviews and schedule the press screening less than 48 hours before a film’s release. Universal Pictures seems to be embarrassed by Dumb and Dumber To and they very well should be. Those of us who waited 20 years to see Harry and Lloyd back in action deserve better.