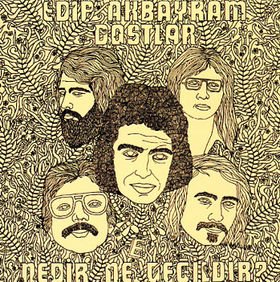 [xrr rating=3.25/5]To this day, Edip Akbayram refuses to drink cold water or eat ice cream in order to preserve his vocal cords. It is a profound sacrifice in the name of art, but Akbayram’s biography is full of much greater suffering. He contracted childhood polio and was carried back and forth from school because his parents could not afford prosthetic braces. You can hear this early suffering in the deep, longing voice that he takes care of so well. Akbayram overcame his childhood affliction and did well enough in school that he could have become a dentist, but instead he turned to music.

Akbayram’s second album Nedir Ne Degildir? was originally released in 1977, but many of its influences go back several years – and in the case of traditional instrumentation, centuries. “Yaralarim” opens the album with a proggy, phased guitar before turning into psychedelic pepper pomp with strings and a brass line. This pleasant track would sound like the folk-psych of any country except for the searching vocals, but track two immediately immerses you in two worlds. “Arabam Kaldi Yolda” begins with Galip Kayhan’s fuzzy guitar line opposite Cudi Koyuncu on the electric bağlama. You begin to suspect bad mastering when the track goes slightly out of tune, but the producer soon revs up the pitch even more before returning to the proper speed.

A fast psych riff opens “Haberin Varmi” before it turns into a slow head banger with a distorted keyboard line that’s doubled on electric bağlama. Akbayram’s voice is almost too pretty for this music, which seems to require the approach of a vocalist who eats ice cream and otherwise puts his voice box in jeopardy. But that vocal approach means that however the (untranslated) lyrics may wax political, the primary emotion is not of anger but of longing. Sometimes, funky longing: mid-way through, this ‘60s flavored track enters the ‘70s with a synth-heavy disco break that closes the song.

“Kaslarin Karasina” opens with a dense play of psychedelic distortion and traditional Turkish instrumentation, Koyuncu’s bağlama work particularly frenetic. Before turning to psych, Akbayram tried to get work as a wedding singer, and this album closer sounds like a traditional Turkish celebration that was suddenly crashed by hippies wielding electric guitars and a Hammond organ.

The Pharaway Sounds label brings Middle Eastern pop to a wider audience, and among its most celebrated releases are the Turkish musicians from the ‘60s and ‘70s who played a spirited hybrid of Anatolian psychedlia. Nedir Ne Degildir? is not as consistently mind-blowing as the music of fellow Turk Barış Manço, but fans of Manço and Middle- Eastern rock will enjoy it.