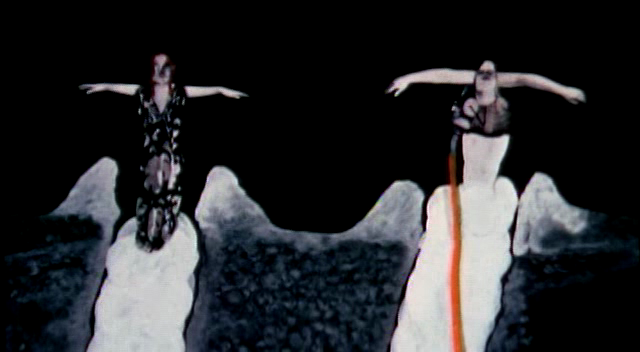 David Lynch’s short films, as much as his debut feature Eraserhead, show the director finding his singular voice piece by piece, gradually moving from his background as a painter to a student filmmaker with such obvious, undeniable talent that he quickly became a legend at the colleges he attended. You can see the sparks of a strange mind with 1967’s “Six Men Getting Sick,” made at the Philadelphia Academy of Fine Arts. A minute-long loop of Lynch’s animated paintings, the short may be Lynch’s most political movie, its depiction of six busts with drawn organs occupying negative space below as the screen fills with black bile and streaks of fuchsia vomit, all while an air raid siren blares until some vague cataclysm obliterates the frame. It feels like a nuclear attack played out of order, with the sick men gradually spewing out their innards from radioactive fallout. But if the film is a statement of any kind, it is rendered so abstractly as to be interpretive, and one can see, in retrospect, how oriented Lynch was to digging out evils of a more personal kind.

That short won Lynch his first acclaim, and it caught the eye of a wealthy alumnus who commissioned what would eventually be “The Alphabet.” Playing like the world’s most nightmarish educational video, “The Alphabet” recites its namesake through the framing device of a sleeping girl thrashing in bed, her inner thoughts illuminated via Pythonesque animation. The first recounting of the alphabet starts looking like musical notation as written on a circuit diagram, with impressionistic strokes of a colored sky above. The film truly kicks into high gear, however, as it begins to introduce menstrual imagery, cut-out female figures morphing into canals of flesh that fill with blood, sending the film spiraling off into an animated frenzy before the live-action girl awakens and vomits blood to end the film. It’s harrowing stuff, but the defining image, and the one most predictive of Lynch’s later style, is a live-action iris shot inserted near the middle of the film that shows a close-up of a woman filmed in washed-out color but for her rich red lipstick. As an isolated moment, it’s the first time Lynch captures his mercurial, ambiguous depiction of women as hypersexualized fatale avatars and prisoners of their surroundings (including the director’s own cramped gaze).

Lynch was deep into production of the long-delayed Eraserhead when he produced “The Amputee” in 1974 as a small exercise to test out two types of video that the AFI Conservatory considered purchasing for student use. Thus, two versions of the film exist, and the first, slightly longer version is mildly superior. The short is painstakingly simple, a one-act, one-shot play of a woman (future Log Lady Catherine Coulson) mentally reading back a letter to herself as a nurse (Lynch) enters to change the dressing on her bloody leg stumps. Coulson’s dictation makes up almost all of the sound in the short, yet Lynch’s uncanny facility with sound as a contrast for image is well-entrenched, with the banal narration of the woman’s emotional recollections and unremarkable observations largely rendered as background noise as attention is drawn ever more to the ghastly, clinical sight of the nurse calmly flushing and cleaning her wounds. The dissonance becomes somewhat moving, making a point about how the recognizably abnormal are defined by their disabilities and differences even as their lives largely contain the same banal thoughts and self-conscious longings as everyone else.

The greatest treasure of Lynch’s early work, however, is the film that got him into the AFI Conservatory in the first place. “The Grandmother” (1970) is by far the longest of these early shorts, but what truly stands out are the numerous symbols and aesthetic traits that would serve him well throughout his feature career. Above all, it introduces the notion of the family unit as a corruptible institution, as prone to abuses of power as any other political or social seat of authority. Mostly live-action, the film begins with animation that births two adults (Virginia Maitland and Robert Chadwick) as if in Edenic creation, though this Adam and Eve commemorate their sudden being by primally rutting, their urges then frustrated by a third figure springing up from the ground, a little boy (Richard White) entrusted into their care. Aware, despite all their grunting savagery, that they now bear responsibility for this other person and thus must tone down the perpetual screwing, the parents instantly turn on the boy, attacking him for involuntary offenses like bed-wetting or, more broadly, existing. In response, the child plants a seed in his bed and grows a grandmother (Dorothy McGinnis), whose protective affection carries its own dark side.

“The Grandmother” is an aesthetic marvel. Drained color renders the film in a semblance of black-and-white until stabs of color that resemble hand-painted silent cinema frames add thematic and symbolic texture. The family home, for example, turns even its colored objects—a sickly yellow lamp, an imposingly restrictive oaken bed frame—into dulled, jaundiced signs of oppression, while the boy’s soiled sheets are shown in discs of brilliant gold. Most importantly, the film introduces Lynch’s deep command of sound, created by Lynch and perhaps his most crucial early collaborator, Alan Splet. The muffled but terrifying screams and roaring industrial wind would recur in the duo’s pioneering soundscapes for Eraserhead, but they are already advanced here, and it’s no wonder that the AFI couldn’t recommend Lynch to their program quickly enough when reps saw it.

The confidence of these short films is remarkable. Even something like “The Amputee,” an experiment not only in tone but in shooting technology, has the firm grasp of a young man with an uncompromising vision, a vision that no one else shared or could even fully understand. Each of these shorts has traces of Eraserhead in it, and if that film delivered on the promise of this work, it in no way dilutes their achievement. Along with the student films of Jane Campion and Martin Scorsese, they represent some of the most illuminating documents of innate auteuristic talent ever preserved.