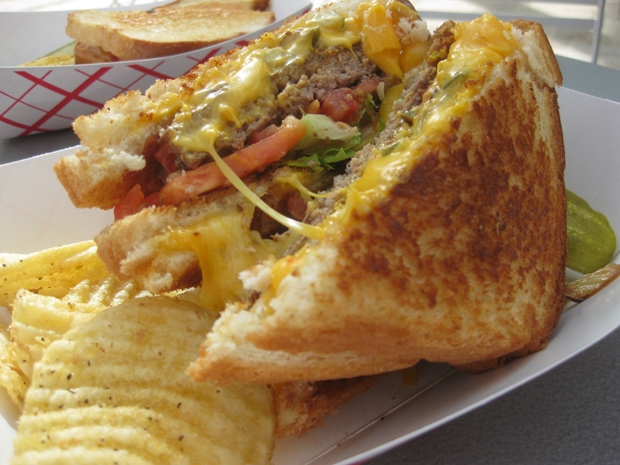 Their sign says it best: “Come by for a taste of your childhood. Unless your childhood sucked, then we’ll share a taste of ours.” The one thing I liked that my mom cooked was her grilled cheese. Crappy white bread, crappy, melted American cheese, butter. Its simplicity may be what makes it so great. The commingling of low-quality ingredients gives it an almost Southern-food level of wow.

But The Grilled Cheese Grill has everything from this classic, heart- and soul-killing sandwich, to a more daring “Cheesus,” a quarter pound ground beef patty sandwiched between two classic grilled-cheese sandwiches with tomato and grilled onions ($8.50). Also on the menu are $6.50-$8 sandwiches varying between a four-cheese melt to an Italian-meat combination with olive tapenade and provolone to various cheese and bacon or jalapeño combinations.
We had the Italian-meat combination (Moondog, $7) and the Cheesus ($8.50) because, well, we had to. All of the sandwiches came in a little paper boat with a pickle and a smattering of potato chips. The pickle was good; the chips were meh.

Like the pepperoni in a suburban pizza restaurant, I knew I was going to pay for this later: the orange grease coming off the Moondog made me feel that heartburn was on the horizon. The provolone was a bit mild for this sandwich and didn’t stand up to the flavors of the healthy serving of meat and the salty olive bits. The bread was good: crunchy, not too buttery. Both my dining partner and I preferred the Cheesus, although I’m rarely a fan of ground beef. It wasn’t the beef that made it, though: it was the shitty, childhood Velveeta-like cheese in the bun that made this a super-awesome cheeseburger.

Food like this is almost a dare though, and I don’t think either of us would return for this item. It’s just–a lot. It’s more a mental challenge than a physical one, though. American food: in the scheme of things, it’s just not that good for you. And we could tell that minutes of our life at the very least was being shaved off for the slight pleasures we were getting from the gooey, processed cheese and radioactive bread.

Note: they do have “good” bread and vegan options. So, this doesn’t have to be an American tragedy every time. And it was tasty, that’s for sure.

Time: We rolled up at 11:30 and ordered. The friendly attendant called out “Burger!” and then let us know that’s because it “takes a while to cook.” Nevertheless, the wait was minimal, about 10 minutes.

Value-3: This is about what I’d expect for the amount of product and effort they put into this. The quality of the cheeses, other than the American cheese-food product, and the meats seemed pretty good. The quantities were decent.

Gut check at 3pm: Not hungry. I’ll be hungry in another three hours though, so this won’t wreck dinner plans. Kind of perfect, really.

Sustainability-2: Paper garbage, beef, American processed food. On the converse, they have local bread, so get a point for that. But yeah, in the scheme of things, they’re not winning any green awards for this.

Fear Factor-4: This all depends on what scares you. If you grew up in the suburbs, this would probably be less scary to you. But as someone who doesn’t normally eat American food, between the grease, the beef, and the American cheese, I’m a little scared of dying from eating this. I like my heart.

Staying Power-5: This is their third location, and I see no signs of them slowing down. They serve a quality product at a fair price and do it quickly. It’s kind of the best of all worlds with respect to a food cart.

Creativity-4: Their cheeseburger is called the “Cheesus.” Do I even need to say any more? No? Well I will anyway. They also have grilled jalapeños, colby jack, cream cheese, and corn tortilla chips on sourdough on one sandwich. They cut the crusts off, because that’s funny. They kind of win here. 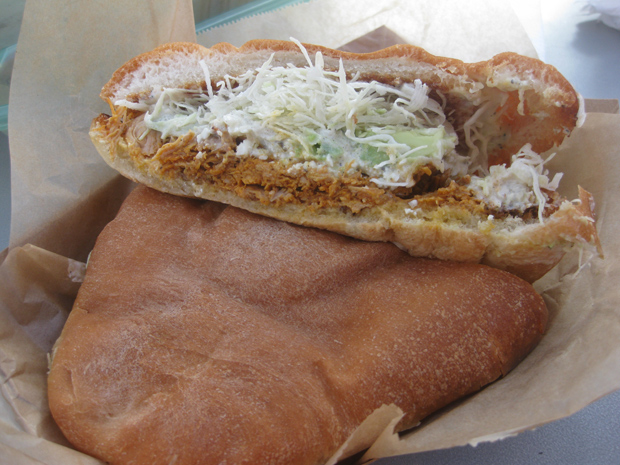 Synopsis: “Whitey,” food cart edition (güero means “white guy”), serves fantastic Mexican-style tortas. What is a torta? It depends on your dialect and your region. These guys do two lightly toasted (with oil on a griddle) half-buns, still leaving the rest of it soft and fill it with your choice of pork, chicken or vegetarian. It comes with shredded cabbage, onions, pickled onions. For $0.25, you can add chipotle crema and for another quarter you can add cotija cheese. We went with these additions.

Also, they have available an habanero salsa in a bottle that will destroy you. I highly recommend it for its flavor; in moderation, it added a really great flavor to my already awesome sandwich. (Their housemade version availed itself when I went back for another the next week. Less hot, more flavor.)

The crunch we got from the bun was a great textural element to both the pork and chicken tortas ($8.50). The cabbage was fresh and crunchy as well. The chicken had a nice reddish-colored marinade that dripped down my hand. The crema and cheese were sort of lost in the mix. Both of us thought this was a very tasty and filling sandwich. The pork version included hints of cumin and boasted the addition of an avocado. It was slightly better than the chicken torta, which is saying something since the chicken was very good. We talked about this place for weeks after eating it.

Time: They took their time grilling our buns. We received our sandwiches in 10 minutes.

Value-3: $8.50 (or $9.00 with additions) is a little bit on the high side for a cart. To their credit, they use Draper Farms chicken and the buns were very fresh. We were definitely full after our lunch.

Sustainability-3: Quality meat, it had to have been local bread, and Go Box! The pile of garbage from the non-Go Box! item was minimal–a little bit of paper and a small paper boat. No plastic to be found anywhere.

Fear Factor-3: This may scare off people unwilling to try new things. Unfortunately, a torta is not something that most people are familiar with. Shredded pork/chicken between two buns, though, shouldn’t really be in any way scary. It’s a frickin’ sandwich. And we barely broke out our Spanish since it was a güero/gringo working there. This was a fairly new cart and it was incredibly clean and sanitary.

Staying Power-4: This was one of the better meals we have had. If this doesn’t survive, well, it’s not because of the quality of the food.

Creativity-2: White guys making Mexican sandwiches. That’s creative, right? OK, it’s not super creative, but the items were good and the execution was good enough that I’m giving them at least a little bit. 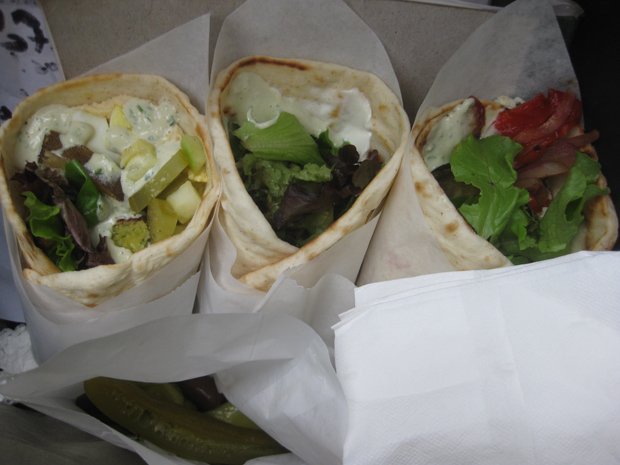 Synopsis:Wolf and Bear’s tagline is “where Middle East meets Portland.” That’s pretty accurate, really. Portland has a penchant for good-quality ingredients, a heavily vegetarian/vegan-friendly batch of offerings, and a creative angle to many of our foods. While we’re not even close to being done with this project, Middle Eastern food at a cart has already become cliché. But Wolf and Bear’s is a little bit different. A Middle Eastern-tinged salad or wrap will run you $5.50-7.50. The closest thing to meat available is falafel. I went with the Olea ($7.50), a labneh, lettuce, grilled-eggplant concoction featuring caramelized walnuts and onions with gorgonzola cheese. We split a lettuce wrap for $3 that was a full pita with hummus and lettuce and a smattering of other goods. My food partner got the Iraqi-Jewish breakfast pita (Sabich, $7.50), which was pretty much what I got without the cheese and with a hard-boiled egg in it. Our total bill was $18.

In summary: “It was very good, but I don’t know if I feel compelled to go back.” The elephant in the room here is that when everything is smashed together in a pita, it just tastes generally Middle Eastern. I didn’t really taste many of the subcomponents. Is there an antonym to “synergy?” I’m going with antergy. That’s sort of what happened here: everything just sort of gets lost in the fusion.

Time: It took about 8 minutes to get our food. Our service was super friendly. The pickles and peppers they included were a nice bonus as well.

Value-1: I can go to a Lebanese restaurant for cheaper. And I can probably get some protein while I’m at it. At least they didn’t load everything with cucumber.

Gut check at 3pm: Staaaaaaaaaaarvvvviiiiiiiiing. I could eat my neighbors right now.

Sustainability-5: There are a couple of points they get here. First off, there wasn’t a mountain of garbage at the end of our meal. Secondly, the little garbage generated was all paper and compostable. It was all vegetarian, which is better for the energy density of the production. They do all organic and local produce as well. I’m not sure how much greener you can get in purchasing decisions.

Fear Factor-1: Who’s a-scared of vegetarian pitas? Everyone’s white, too, so there’s none-a that a-rab bashing that your redneck uncle likes to do to our president.

Staying Power-5: Vegetarians in Portland aren’t going away; neither is Wolf and Bear’s. They’ve created a three-cart empire in some of the most conspicuous pods. They started out as a lonely cart on 20th and SE Belmont in a blank lot kitty-corner from the best graveyard in the city. Now, they’re in the megapod. That’s a success story.

Creativity-4: Iraqi-Jewish breakfast: +1. Gorgonzola in a pita: +1. They’re creative with their ingredients and how they approach it. Good work here, folks.