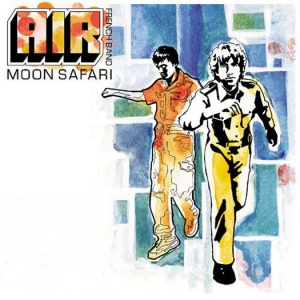 Air came together in 1995, with Nicolas Godin and Jean-Benoît Dunckel diverting from their respective architecture and mathematics backgrounds to try their hands at chill-out music. After dropping an EP, the duo would release debut album, Moon Safari, in 1998. With fellow downtempo purveyors like Thievery Corporation infusing their music with dub and Brazilian influences, while Kruder & Dorfmeister stirred smooth ‘70s jazz into their remixes to cool off aggressive drum ‘n’ bass and hip hop, Air had more celestial aspirations.

While the product was something completely unique, even for the ephemeral downtempo heyday, that’s not to say that Air didn’t borrow and repurpose. Moon Safari kicks off with “La Femme D’argent” (translation: “The Silver Woman”), which samples a beat from Edwin Starr’s “Runnin’.” There’s no better showcase than this smooth, increasingly cosmic opening track to illustrate how funk subtly finds its way into Moon Safari. Even as it’s built upon a sample of a song that appeared in a ‘70s blaxpoitation flick, “La Femme D’argent” layers in the cosmic effects and eases the more energetic pacing of Starr’s original into a laid back groove that gently stretches out past the seven-minute mark.

The first of many manipulated vocals appears on “Sexy Boy,” a track that initially churns with an electronic force and is the closest this album gets to the kind of music put out by compatriots Daft Punk. But then Air downshifts the momentum to whispery vocals, plinking arpeggios and an overall mellow excursion into the ether, one that persists throughout the album. Almost serving as a mirror image, other standout track “Kelly Watch the Stars” trickles to a start before gushing into a fluffy bounce accompanied by vocoder-like vocals. “Remember” keeps the vocal effect going, making large swaths of the album feel as though they could’ve been constructed entirely by an otherworldy artificial intelligence. There’s a percussive sample of the Beach Boys’ “Do It Again” nestled within this track, but that robotic voice and theremin-like swells make the song far more appropriate for a lunar rover than a surfboard.

Were it not for the two tracks featuring guest vocalist Beth Hirsch, Moon Safari would stay immersed in the stars. Instead, “All I Need” and “You Make It Easy” (the third and seventh tracks, respectively) tether Moon Safari to worldly yearnings. Hirsch’s contributions make it easy on the ears, but ultimately they rein in the album far too much. The majority of Moon Safari exists on a plane of its own design, a space that the duo wouldn’t even attempt to venture back into with follow-up efforts. The album was no doubt influential to fledgling acts that trailed it Air’s wake—put together, Hirsch’s vocals on “All I Need” and the roving pace of “Talisman” sound as though they could’ve begat Zero 7’s “In the Waiting Line.” But other than Hirsch’s two tracks (“You Make It Easy” even gets a little Disney love song-ish), Moon Safari dwells in a transcendent place where easily decipherable words are not necessary.

Still, it’s remarkable that — even as a highlight of a downtempo genre that was short-lived in its popularity— Moon Safari remains largely inimitable, even by Air themselves. The album certainly opened up doors, as the duo would be commissioned by Sofia Coppola to score The Virgin Suicides two years later. But upon their next studio album, 10,000 Hz Legend, their shift in focus was drastic, exploring more propulsive and less polite terrain while teaming up with the likes of Beck. Even strong later releases like Talkie Walkie and to a lesser extent Pocket Symphony feature tighter song structures, and it’s clear the duo had no desire to repeat themselves but instead continue to explore new influences, often drawing from Japan for both inspiration and instrumentation. Even the silent movie-inspired Le Voyage dans la Lune, despite a return to cosmic imagery, is far more experimental and ambient. As we stretch out into the 2010s, music trends have once again favored the more aggressive and frenetic, with EDM and dubstep rising as the electronic music du jour. Moon Safari, then, paradoxically holds up with an accessible and timeless quality that nevertheless is tied to the turn of the millennium.