By the time Wes Anderson released The Life Aquatic with Steve Zissou (2004), Bill Murray had garnered so much good will as an actor that he could play a homophobic, venal, misogynistic deadbeat father and still manage to elicit the sympathy of the audience. Murray took on potentially unlikable characters for Anderson before Zissou, but his Herman Blume had redeeming qualities. What is there to admire about Zissou, however? Pretty much nothing as he lies, steals and attempts to philander through the film’s runtime. There are only a handful of actors who can play such an unlikable character and not lose the goodwill of the audience. Bryan Cranston is one, and Bill Murray is certainly another as he’s made a career of playing lovable louts and layabouts. But is his Zissou a truly despicable character to which Murray’s starbright sheen blinds us? Very likely.

It makes sense that Life Aquatic is the most polarizing of Anderson’s films. In a fallow period between the admiration of Rushmore and The Royal Tenenbaums and the adulation for Fantastic Mr. Fox, Moonrise Kingdom and The Grand Budapest Hotel, Anderson released the challenging Aquatic and The Darjeeling Limited, two films that incorporated the director’s worst quirks and matched them with characters that could be considered wholly unlikable. In a recent interview with NPR, Edward Norton claimed, “I’ve come to think that a lot of Wes’ movies are about the same thing, which is maybe people struggling with the way that the family that you’re born into fails you or you don’t have the family that you want, so you go and create the family that you need.” In Life Aquatic, people glom to Zissou, but when the film begins the former great man—a Jacques Cousteau-like sea explorer—is washed up. He has used up the goodwill of his financial backers and his wife Eleanor (Anjelica Huston) has little use for him. During a recent expedition, a rare jaguar shark killed his best friend and partner and now Zissou wants revenge. He plans to find the fish and blow it out of the water. 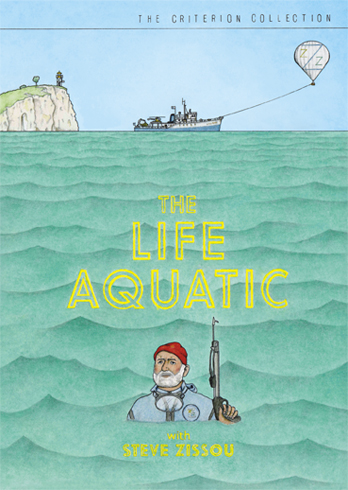 Despite his monomania, reliance on marijuana and general ill-nature, a ragtag crew sticks to Zissou, the ad hoc family to which Norton referred in his interview. These lovable losers and man-children still see the shine on the Zissou name and try to keep hope alive by keeping Zissou insulated and happy. It makes sense that Noah Baumbach helped Anderson with the screenplay as Zissou is reminiscent of Jeff Daniels’ character from The Squid and the Whale and Ben Stiller’s stunted titular character from Greenberg. But when Ned Plimpton (Owen Wilson) appears, claiming to be Zissou’s long-lost son, cracks in the crew begin to appear.

Anderson falls back on the same dynamic that propelled Rushmore as Ned and Zissou fight over the same woman (a reporter played by Cate Blanchett). But while the younger woman in Rushmore reignites Murray’s character’s taste for life, Blanchett’s reporter has no interest in Zissou. She sees him for what he is and rejects his advances. Then he goes and pilfers equipment from a rival oceanographer (Jeff Goldblum) and shoots up a bunch of pirates.

There is an uneasy balance between comedy and drama in The Life Aquatic, the impenetrability of Murray’s character makes it difficult to parse the difference. Beginning with The Royal Tenenbaums, Anderson went through a period where he would kill off his characters to add dramatic tension to his films. While it feels insulting in the subsequent Darjeeling, Ned’s death here could have been more meaningful. It comes, it goes and then the characters are strutting along to “Queen Bitch” by David Bowie.

So is The Life Aquatic a defining Murray performance or the weak link in a strong series of roles that include Rushmore and Lost in Translation? If anyone can make a complete scoundrel likable, it’s Bill Murray. Yet, the sadness of Herman Blume and the giddiness of the newly enamored Bob Harris don’t ring through here. Instead, we have a man who made a wreck of his life, a wreck that he sees clearly. When Zissou and his crew see the jaguar shark for a second time, everyone puts a hand on Murray’s shoulder. He should have been the one reaching out to all of them.